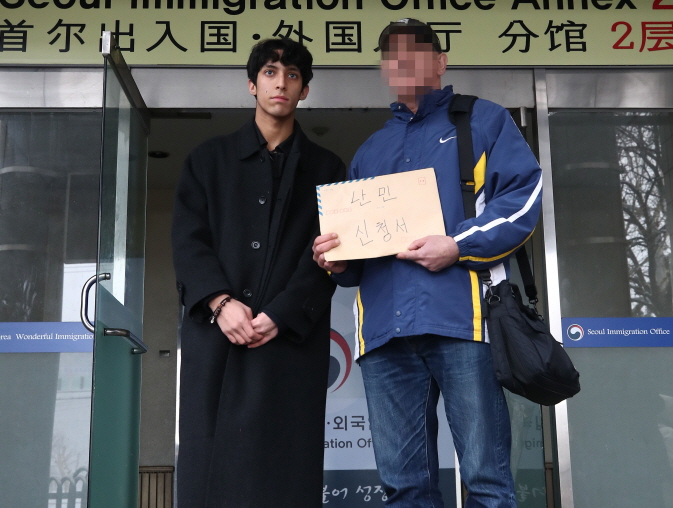 Iranian man, A (R) and his son Kim Min-hyuk,(L) who was granted status as a refugee. (Yonhap)

SEOUL, Jun. 12 (Korea Bizwire) — “I will do my everything to live with my son and do my best on review. Thank you.”

The remark was made by a 52-year-old Iranian man who spoke to reporters in poor Korean ahead of his second refugee interview at the Seoul Immigration Office on Tuesday.

The 52-year-old Iranian is the father of Kim Min-hyuk, a 16-year-old refugee from Iran who was granted status as a refugee thanks to his school friends’ pleas and protests at Cheong Wa Dae, South Korea’s presidential office.

The Iranian man, referred to only as A, said, “I didn’t answer well last time because of my poor Korean ability, but I studied this time, was baptized by the Catholic Church and was confirmed.”

He plead with the public to pray on his behalf.

The result of the review is expected to be released in about two weeks.

The Iranian in question entered South Korea in 2010 with his son on business, and later converted to Christianity.

Iran is a country subject to strict Islamic law, and “changing one’s religion” is a felony punishable by death.

For this reason, the Iranian applied for refugee status in 2016, but was rejected due to uncertainty of his religious faith at the time.

The Iranian also filed a lawsuit asking for the cancellation of the decision, but lost the first and second trials one after another.

His son, Kim Min-hyuk, said, “My father will be put to death when he returns to his home country.”

He also added that “I hope he will be recognized as a refugee in South Korea, guaranteed safety, so we can live together again.”