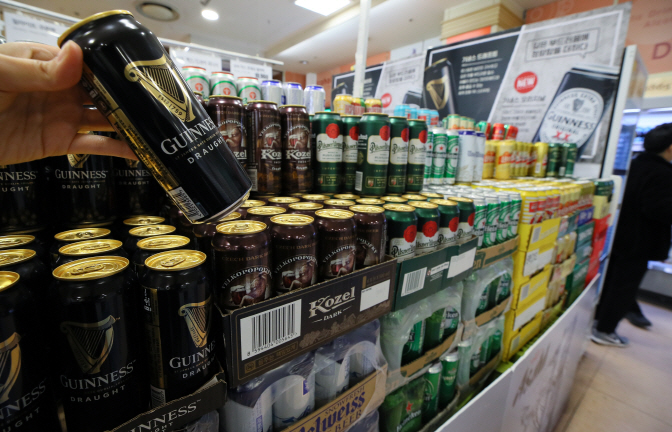 The drink-alone culture sweeping through South Korea in recent years has reportedly led to the popularity of unique beer products. (image: Yonhap)

Average beer imports each month between January and November came in at US$26 million, indicating a possibility that last year’s total beer imports may exceed the US$300 million milestone.

Japanese beer, in a repeat from 2017, remained first in the value of imports at US$73 million.

South Korea’s enthusiasm for Japanese beer is unlike any other, as the country accounted for 63 percent of all beer exports from Japan as of 2017. Asahi took the lead among imported Japanese beer brands, followed by Sapporo.

Chinese beer took second place with US$37.4 million in imports, similar to last year’s record (US$37.7 million). Belgian beer imports have more than doubled since 2016, closing in on Chinese beer at US$33.9 million.

The drink-alone culture sweeping through South Korea in recent years has reportedly led to the popularity of unique beer products.

Imports of American beer reached US$32.9 million, which is twice the amount of the previous year (US$17.4 million).

Imports of German beer, ever since reaching second place in 2014 and 2015, slowed to US$23.5 million, taking a step down from the previous year to hold fifth place in 2018.

Dutch and Irish beer accounted for US$16.7 million and US$19.5 million in imports, respectively, lining up behind German beer. Czech, Polish, and French beer also made the top 10 list.