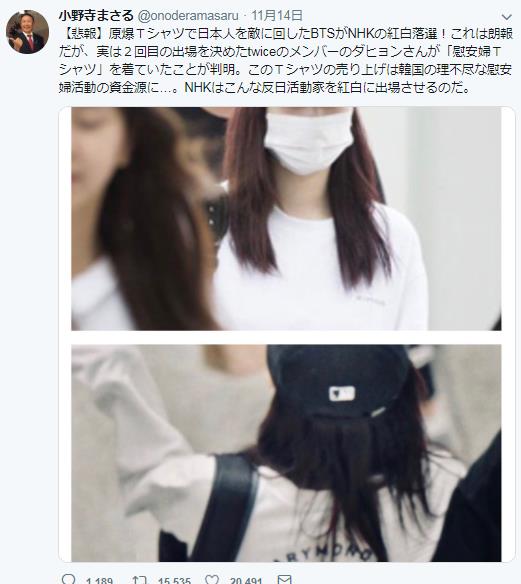 This image captured from Onodera Masaru’s Twitter account shows TWICE member Dahyun’s T-shirt made by Marymond, a company that supports South Korean women who were used as sex slaves by the Japanese military during World War II. (Yonhap)

SEOUL, Nov. 16 (Korea Bizwire) – A Japanese right-wing lawmaker has claimed that a member of K-pop girl group TWICE is engaged in anti-Japanese activities, citing her T-shirt as an example.

The politician, Onodera Masaru of the Liberal Democratic Party, on Wednesday took issue with Dahyun’s wardrobe choice on his Twitter account.

In the photo he posted, she was wearing a white T-shirt made by Marymond, which supports what he called “the inappropriate activities” of those who help South Korean victims of Japan’s World War II sex slavery, or the so-called comfort women. A portion of the proceeds from the company’s sales is given to that cause.

He then went on to blame broadcaster NHK for allowing the group to appear on a major year-end music show. The Japanese television network recently called off an appearance by BTS on the same show, following a controversy surrounding member Jimin’s T-shirt bearing an image of an atomic bomb explosion.

While Big Hit Entertainment, BTS’ agency, apologized for causing concern, it emphasized there were no political intentions behind the wardrobe choice. Separately, BTS leader RM was also put under the spotlight for a hat he wore during a photo shoot several years ago which had alleged Nazi iconography.

The politician’s claim might find an audience among the country’s right-wing activists, but it has also triggered widespread criticism from the country’s netizens.

Some wrote he should have learned history correctly, while others pointed out that TWICE, with three Japanese members, is not anti-Japanese.