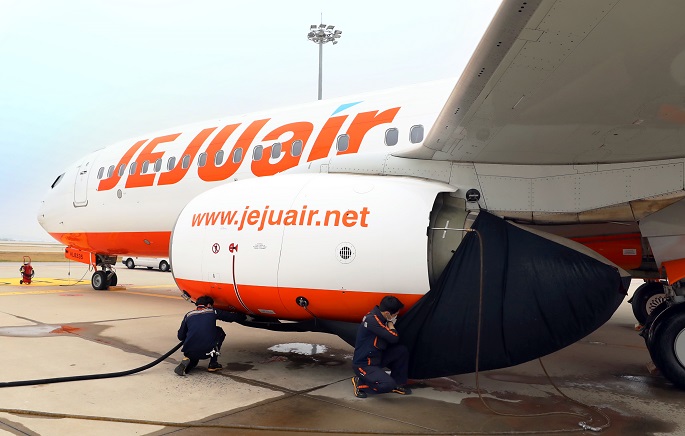 The South Korea’s biggest low-cost carrier said Thursday that it had replaced the steel brakes on 24 planes, including four in 2019, five in 2020, 12 in 2021 and three in 2022, with lightweight carbon fiber brakes.

For a one-way flight on the Gimpo-Jeju route, carbon brakes can contribute to reducing fuel weight by 11.52 kilograms, thereby reducing carbon emissions by 36.4 kilograms of carbon dioxide.

Through the operation of 21 aircraft with new by carbon brakes, Jeju Air was able to reduce its fuel use by about 160 tons last year.

The company also reduced carbon emissions by 505 tons of CO2 last year and about 154 tons of CO2 in the first quarter of this year. Another engine replacement is scheduled for one more plane this year.

In addition, Jeju Air is also saving fuel through the washing of aircraft engines.

It has been washing the engines of its aircraft twice a year, aimed at removing foreign materials from engines and improving flight efficiency.