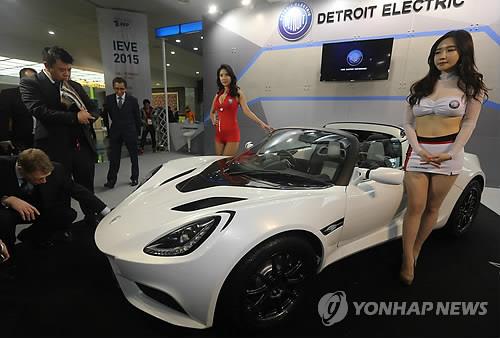 JEJU, March 18 (Korea Bizwire) — It isn’t too far fetched to say that Jeju Island‘s attempt at promoting itself as a test bed for the newly-rising electric vehicle (EV) industry has caught on, at least in terms of demonstrating the zeal to realize its ambitious plans.

The second International Electric Vehicle Expo (IEVE) on the island off South Korea’s southwestern coast drew some 72,000 visitors during its 10-day run earlier this month, according to organizers. Last year’s head count was 47,000.

Fourteen companies participated in this year’s expo, including local carmakers Kia Motors, GM Korea and Renault Samsung Motors, as well as those from overseas such as BMW, Nissan Motor, Detroit Electric, and BYD Auto.

Also present at the expo were some 50 battery suppliers and other businesses related to the EV industry from both South Korea and China.

The IEVE began as Jeju, a popular honeymooners’ resort, set out to bring battery-powered automobiles into people’s daily lives and help reduce car emissions on the island now visited and heavily invested in by foreigners.

Jeju’s current goal is to push up the number of such cars on the island to 371,000 units by 2030 so that all residents become EV drivers and the island finally becomes a zero car-emissions region by that time.

“The plan is to provide a test bed for electric cars so that manufacturers from anywhere around the world — be it Germany, the United States, Japan, or elsewhere — look to Jeju as a platform to test out their EVs and to hold discussions on EV technology standards,” said Kim Dae-hwan, head of the IEVE organizing committee.

Emphasizing that the IEVE is “a unique event that only includes battery-powered vehicles instead of other eco-friendly cars, such as hybrids,” Kim said the expo holds a symbolic value for the electric car industry.

Although the ambitious outlook set out by the Jeju provincial government seems promising on its own, the island’s officials will have some catching up to do if they want to keep up with their timeline, as the current number of EVs driven on the island is far short of the government’s initial goals.

Last year, however, the number of registered electric cars in the region came to a little over 850 units. Even after including the 1,515 units the environment ministry said it would help distribute via financial support to each buyer this year, the province will still have to raise the number by more than 10-fold in less than three years to accomplish the first phase of their goal.

Furthermore, aside from the task of populating Jeju with electric cars, there are bigger issues at hand, namely setting up the necessary infrastructure that can sustain the use of EVs throughout the island. 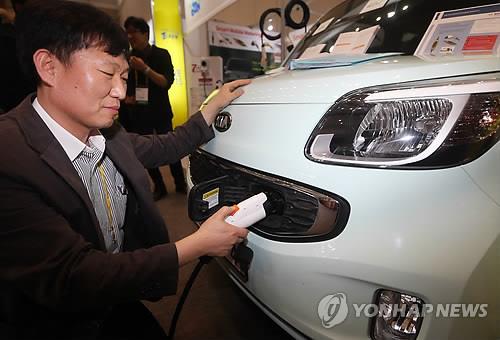 “The rapid growth of the Japanese EV market stems from the Japanese government’s efforts to set up the charging stations every 30 kilometers along the highway, and South Korea will also need these types of service areas for EVs in order to lessen the drivers’ anxiety when traveling long distances.”

As this challenge has surfaced multiple times, the government has been searching for a solution, the latest one being the Jeju Province and the trade ministry’s memorandum of understanding with several local companies to install additional chargers throughout the country.

Under the latest agreement, Korea Electric Power Corp, KT, Hyundai Motor, Kia Motors and several other firms will invest 32.2 billion won (US$28.48 million) to set up 5,580 EV chargers in the country, of which 3,750 will be built on Jeju Island by 2017.

But even with these chargers, industry watchers say Jeju still lacks the sustainability of an EV-centered environment.

Albert Lam, chairman of U.S. electric car maker Detroit Electric, said that while Jeju province’s initiative to replace all its fuel-powered cars with EVs is “achievable,” providing the necessary electricity is the challenge.

“The smart-charging infrastructure is also very important,” Lam said, emphasizing the need for both electric utility provision and balancing the energy use.

“I heard your goal is to have all the cars here, by 2030, to be electric vehicles, and just by doing a rough calculation, (one can see that) you will need a vast charging infrastructure and a lot of energy to charge them,” he said, adding that not all electricity companies will be able to say they have the energy to charge all the EVs.

The South Korean government is not unaware of these problems.

The trade ministry, for instance, has been working with local firms on setting standards for vehicle-to-grid (V2G) systems, which can be used to stream power between parked electric cars and power lines, thereby boosting the efficiency of energy use. The ministry is also treating EV batteries as another form of energy storage system and to make it possible to sell the electricity used in charging the batteries.

“South Korea’s EV market is still taking its baby steps in terms of the infrastructure, such as building enough charging stations, but with the willingness of the government as well as buyers, it may be possible (to grow),” said Chief Executive Officer Takehiko Kikuchi of Nissan Korea.

“Aside from China and Japan, South Korea has the most potential for electric car market growth in Asia, and within the country, Jeju Island seems to be the most enthusiastic.”