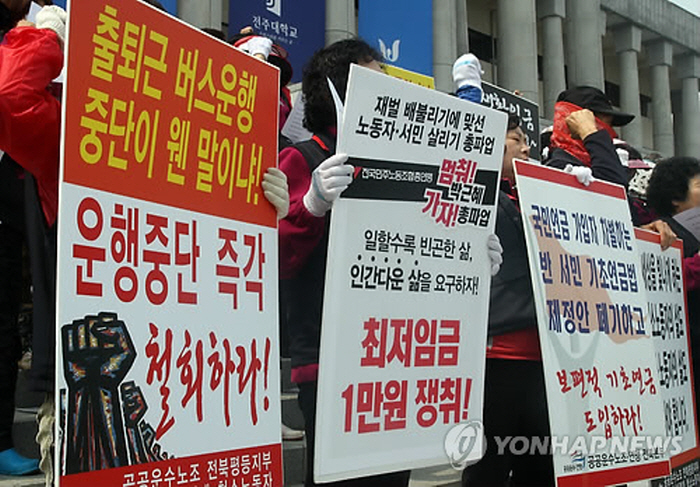 A group of 70 cleaning workers protested on April 9 in front of the main building at the university. (image: Yonhap)

JEONJU, Apr. 10 (Korea Bizwire) – A group of 70 cleaning workers from Jeonju University protested against the university’s decision to raise their hourly wage by no more than 90 won (US$ 0.08) and discontinue a free bus service, which has been operating for the past 20 years, on April 9 in front of the main building at the university.

The group of workers initially demanded that Jeonju University and their contractor raise the hourly wage by 420 won (US$ 0.38) to 6,000 won (US$ 5.47). However, the three parties could not reach an agreement over eight rounds of negotiations.

Jeong Jeong-Soo from the Korean Confederation of Trade Unions said that the government’s recommended hourly wage for university cleaners last year was 6,945 won (US$ 6.33), and the actual hourly wage paid by universities in the Seoul Metropolitan area has increased to around 6,500 won (US$5.93) recently.