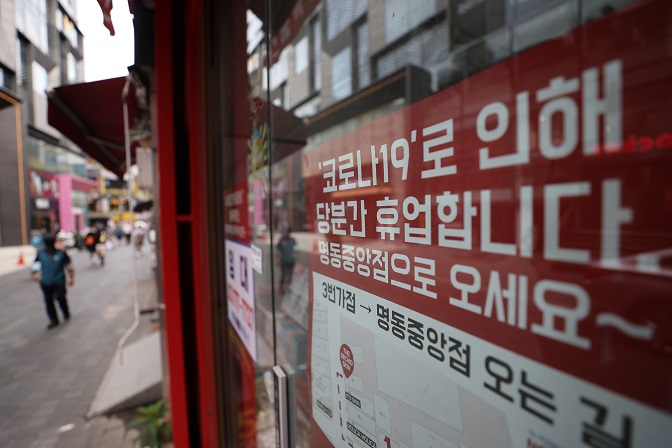 This photo, taken Aug. 22, 2021, shows a store in the shopping district of Myeongdong, in central Seoul, that has a sign announcing its temporary closure due to the pandemic. (Yonhap)

SEOUL, Aug. 26 (Korea Bizwire) — The number of jobs for wage workers in South Korea grew at a slower pace in the first quarter than three months earlier due to slumps in in-person service sectors amid the pandemic, data showed Thursday.

The number of paid employee jobs reached 18.9 million in the cited period, up 321,000 from a year earlier, according to Statistics Korea.

The tally was lower than an on-year increase of 503,000 in the fourth quarter of last year. It also marked the smallest increase since the second quarter of 2020, when such jobs increased by 211,000.

By age, those in their 20s and 30s suffered extended job slumps amid the fallout of the COVID-19 pandemic.

The number of paid jobs for those in their 20s and younger declined 35,000 on-year, marking the fifth straight quarter of falls.

Jobs for salaried workers in their 30s fell 63,000 from a year earlier, extending on-year decline to a sixth straight quarter.

By industry, the accommodations and food service segments suffered the fourth straight quarter of falls in jobs last quarter. Such sectors shed 72,000 jobs for wage workers on-year, larger than a fall of 51,000 posts.

But jobs in the public administration and social welfare sectors rose 70,000 and 148,000, respectively, supported by the government’s efforts to increase temporary jobs.

The country reported job additions for the fifth straight month in July amid the economic recovery and last year’s low base.

But the pace of job growth slowed in July from the previous month as employment in face-to-face service segments was hit hard by the fourth wave of the pandemic.