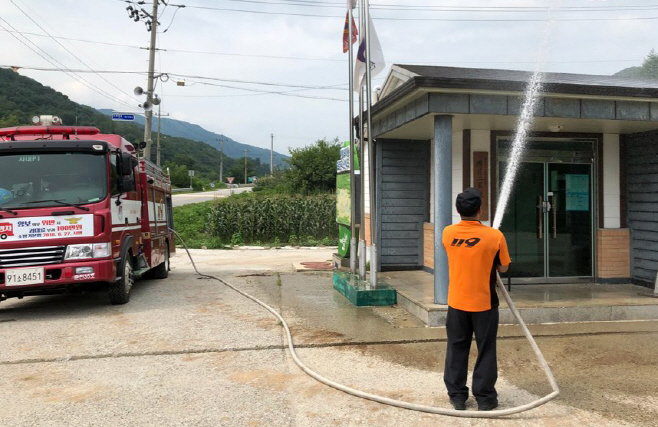 SEOUL, Jul. 25 (Korea Bizwire) — In an attempt to cool down roads that have been simmering from the recent heat wave, firefighters have come to the rescue.

Firefighters hope that the measure will prevent heatstroke and exhaustion in the elderly and underprivileged members of society who might not have access to air conditioning.

In addition, rescue workers visited various senior citizen centers to relay emergency information and to perform medical checkups on those who are more vulnerable to the heat.

One senior citizen expressed her gratitude for the firefighters as they checked her blood pressure and blood sugar levels.

“The water sprayed on the roads and rooftops kept us cool for a while,” said the senior citizen.

According to Gangwon Fire Headquarters, eight people were rushed to the hospital for heat syncope, six each for heat exhaustion and heat cramps, and one for heatstroke between June 29 and July 24.

Nearly half of the total of 21 patients were in their 60s, having been working in the fields, exercising or doing other activities outdoors.

Lee Heung-gyo, chief of the Gangwon Fire Headquarters, said that people should refrain from outdoor activities during extremely hot days and recommended that people to drink lots of water and get enough rest.

“If anyone feels dizzy or helpless due to the heat, please call for emergency assistance right away,” said Lee.