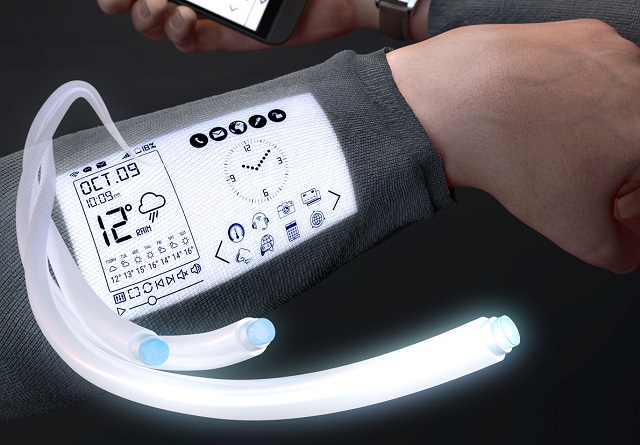 This photo provided by KAIST shows a concept image for a display made of e-textiles.

SEOUL, April 21 (Korea Bizwire) — The Korea Advanced Institute of Science and Technology (KAIST), South Korea’s top-ranked science and technology university, said Wednesday it had succeeded in realizing a white light-emitting OLED on a fiber thinner than a hair.

It has been difficult to develop white OLEDs, that are necessary for full color display and lighting technology, since they are composed of a tandem structure, two to three times larger than the single-stacked structure of an OLED of the three primary colors.

In particular, the charge generation layer (CGL) within the tandem structure is thinner than other layers, making it vulnerable to bending. It’s not a suitable structure for fibers.

After focusing on the single light-emitting layer that is suitable for fiber structure, the research team developed a white OLED for the first time in the world.

To make it easily visible even outdoors, the research team realized a brightness of 700 candelas per square meter and achieved the electro-optical performance of 10 candelas per ampere.