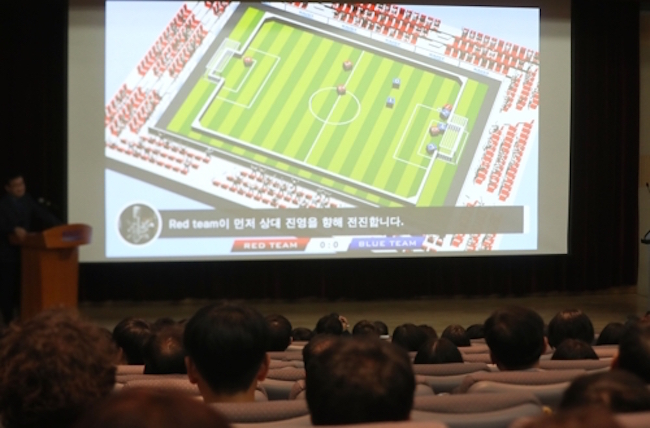 Each football team was made up of five AI, who as the game went on, learned to play with each other. (Image: Yonhap)

SEOUL, Nov. 3 (Korea Bizwire) – Those present at the Korea Advanced Institute of Science and Technology’s Fusion Hall (KAIST University) on November 2 were treated to an unusual spectacle that also doubled as a glimpse of a possible future.

What the assorted gathering of students and interested onlookers were there to see was a virtual football competition “played” between two teams of AI, which were designed with the capacity for deep learning, a form of machine learning that was employed by Google DeepMind’s Alpha Go, the AI that famously beat Go grandmaster Lee Sedol in a five-game set last year.

The game, featuring red and blue numbered blocks moving a soccer ball around a 2D field, was superimposed onto the wall. The competition was the first of its kind ever attempted; the closest comparison would be the “AI vs Human” battles that had occurred previously, namely the aforementioned “Google DeepMind Challenge Match” or the “Deep Blue vs Garry Kasparov” chess matches.

The university plans to turn the game into a global event going forward; it will extend an invitation to foreign schools next year with the support of various organizations. (Image: Yonhap)

Each football team was made up of five AI, who had learned to play with each other prior to the tournament. The preliminaries will take place throughout this month, after which the teams with the highest amount of goals scored will advance to the final round.

An AI sportscaster and sportswriter were also showcased at the event. Both sides that developed the AI football teams had included an algorithm in the game that provided simultaneous running commentary and writeups.

The university plans to turn the game into a global event going forward; it will extend an invitation to foreign schools next year with the support of various organizations.