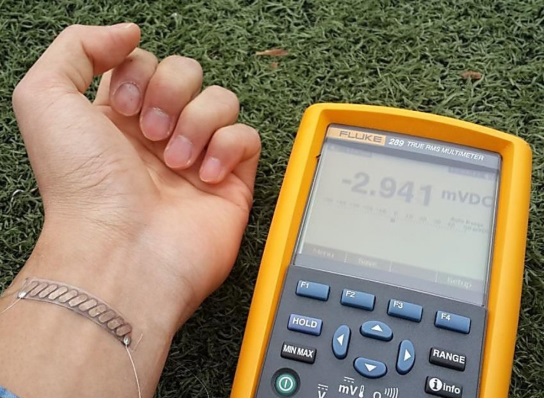 The Netexplo Awards are given annually to tech inventions worldwide that have had a major influence on human life in areas such as energy, environment and education.(image:KAIST)

SEOUL, Jan. 30 (Korea Bizwire) — Korea’s wearable thermo-element technology, which can recharge batteries through skin contact, was selected as one of the top innovations of the year by UNESCO.

The Korea Advanced Institute of Science and Technology (KAIST) announced on January 29 that its “wearable thermoelectric device” was selected as one of the top ten IT innovations at the 2015 Netexplo Awards, presented in partnership with UNESCO.

The Netexplo Awards are given annually to tech inventions worldwide that have had a major influence on human life in areas such as energy, environment and education.

Last April, Professor Cho Byung-jin and his research fellows developed the world’s first wearable element by realizing thermoelectric film on fiberglass. The wearable element can effectively generate electricity from human body heat, is very light and thin, and can easily be integrated into clothing.

Wearable devices are expected to stand at the center of future electronics, but batteries that need to be recharged frequently consist of a challenging problem. With its minimal weight and high generation capability, the technology is rising as a key to solve the battery problem for wearable devices.

In addition, it can be applied to a variety of devices generating waste heat, such as equipment in cars, planes and factories. As part of its efforts, the KAIST research team has established a start-up named TEGway to pursue commercialization of the technology.

For the UNESCO Netexplo Awards, about 200 IT experts vote to pick 10 winners. The award ceremony will be held in Paris on February 4. Among the 10 finalists, the one that receives the most online votes will be honored as the 2015 Grand Prix winner.