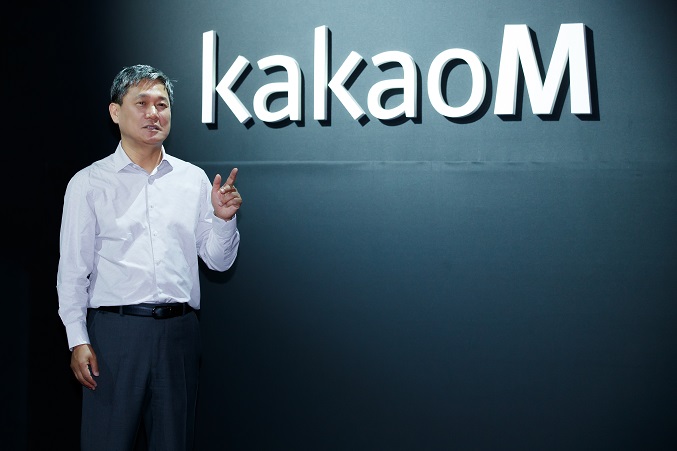 Kim Sung-soo, CEO of Kakao M, speaks to reporters at a press conference on the company’s business plan at the Blue Square in Hannam-dong, Seoul, on July 14, 2020. Kakao M provided this photo.

At a press conference in central Seoul, Kakao M CEO Kim Sung-soo said the company plans to collaborate with industry-leading creators in producing a variety of new film and TV intellectual properties (IPs).

Kim, former CEO of CJ ENM, explained that Kakao M’s goal is to produce and release 15 film and TV contents annually, including blockbuster movies, within the next three years.

“We will offer new contents business models that can produce stable added value by planning and discovering new IPs and diversifying our business portfolio,” Kim said.

The company has sought to diversify its portfolio into TV and films, having secured a majority share in both Moonlight Film and Sanai Pictures, as well as seven talent management agencies, including BH Entertainment, and four music labels, including Starship Entertainment.

Kakao M’s goal is to produce video and music contents worth 400 billion won (US$331.7 million) annually by collaborating with top talents, Kim explained.

The company will also invest 300 billion won on original digital contents, with the goal of creating more than 240 titles annually for consumption on mobile platforms, according to Kim.

The CEO said Kakao M plans to open a new platform within 2020.