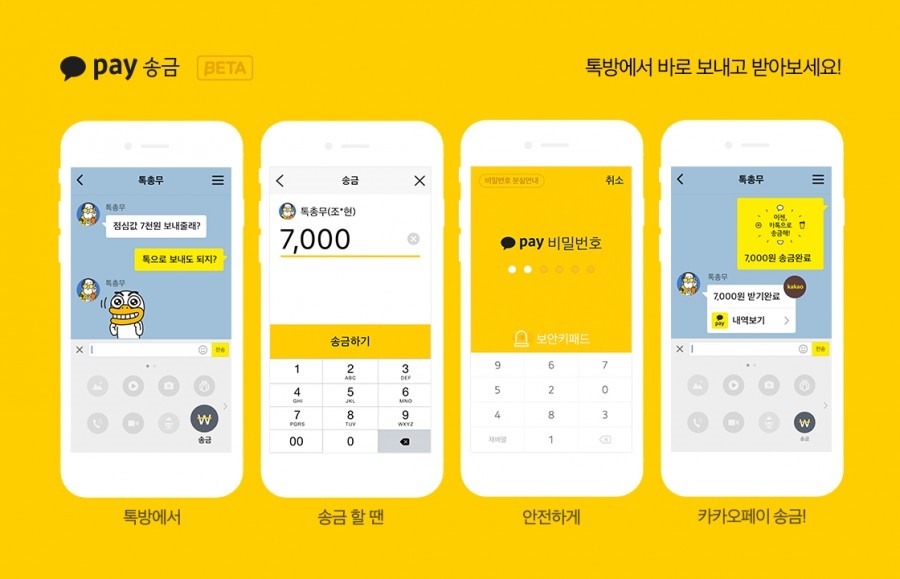 KakaoPay is a service that allows users of the KakaoTalk messenger to transfer money to each other via messages in the form of Kakao money, the platform’s own digital currency. (Image: Kakao Pay)

KakaoPay is a service that allows users of the KakaoTalk messenger to transfer money to each other via messages in the form of Kakao money, the platform’s own digital currency.

The most recent figures released on Tuesday showed the tally of all money transfers occurring via KakaoPay had already surpassed 80 billion with nearly a week still remaining before the end of the month.

This month’s figure is up 60 percent compared to the same time last month, and is indicative of the rapid growth Kakao Corp has experienced in recent weeks.

KakaoPay has been stepping up marketing efforts in recent months by hiring celebrities like hip-hop artist DEAN to promote its name, while introducing interesting features such as one that allows users to ask others for money using KakaoTalk characters.

An official at the fintech subsidiary that operates under Kakao Corp said, “Accounts at over 16 financial institutions including KB, NH, Shinhan, Hana and Daegu Bank are now linked (to KakaoPay). We’ll continue our efforts to improve the service.”

Following KakaoTalk, KakaoTaxi, and KakaoBank, KakaoPay is among the latest services launched by South Korean messaging giant Kakao Corp, which has become one of the country’s biggest companies in the IT industry in recent years, and is often compared with the likes of Naver.