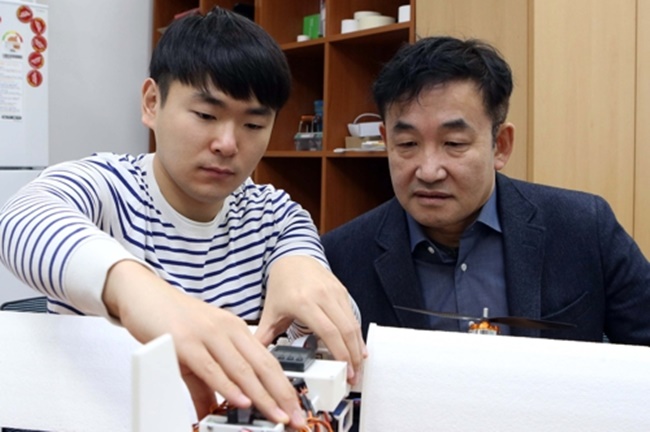 Typically, drones are divided into two main groups, one with fixed wings and the other with propeller blades. (Image: KAIST)

The researchers, led by professors Ha Dong-soo and Jo Cheon-sik, said on Thursday that they had developed a new drone that features main wings that be controlled separately, allowing for a smooth transition between vertical flight and level flight.

Typically, drones are divided into two main groups, one with fixed wings and the other with propeller blades.

Drones with fixed wings often use all-in-one wings to create lift by using air flow for better energy efficiency, but lack swiftness due to a large radius of gyration, whereas drones with multiple propellers lag behind on the energy efficiency front.

Against this backdrop, Professor Ha’s team has invented a new type of drone that flies with twin separately controlled main wings, and also comes with a motor on its tail.

According to the researchers, there are two ways to gain separate control of the wings.

Support can be provided for the fuselage and wings of a drone, together as well as separately, or the sides of the fuselage can be employed as part of a control device to provide individual support to each wing.

Professor Ha’s team took the former approach, creating a new drone with wings that can be controlled individually while an accompanying sensor attached to the body will help adjust the movement of the aerial vehicle.

As a result, the new drone is capable of various movements often impossible for regular airplanes, such as a smooth transition between vertical flight and level flight, according to the researchers.

Since 2016, the research team has been patenting its separate wing control method from an early stage of development in the U.S. and China as well as in South Korea. 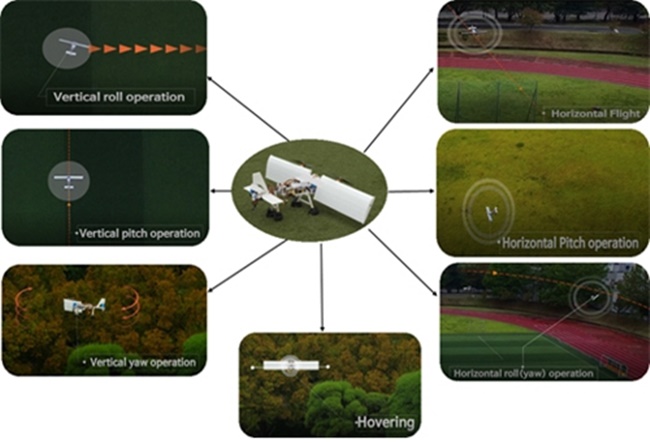 A research team at the Korea Advanced Institute of Science and Technology (KAIST) has developed an unmanned aerial vehicle with separately controlled wings. (Image: KAIST)

“Separate wing control system for small and medium-sized aerial vehicles have not been trialed even in leading countries. We hope to see (the new development) used in a wide range of fields including air transport, safety management and air weapons for military purposes,” Ha said.

The research project was supported by the Institute for Information & Communications Technology Promotion.