SEOUL, Jul. 25 (Korea Bizwire) — Breaking out of a long legal battle with his former management agency, Kang Daniel, a pivotal member of the now-defunct boy band Wanna One, hit the summer music scene Thursday with his first solo album “Color On Me.”

Kang wrote the lyrics for the four out of the total five tracks in the new EP, including the main track, “What Are You Up To,” with which he officially returned to the K-pop scene following a six-month hiatus.

His choice of music for the much-anticipated first album was trendy medium-tempo synth sounds matched with groovy choreography.

“I really didn’t have enough time (to prepare this album) so I thought about (the album production) day and night to come up with a quality album despite the lack of time,” Kang said in a press showcase in Seoul of “Color On Me” on Thursday.

“It really was not an easy job to write different stories for the lyrics (of the four tracks),” he said.

“I wanna be busy and hope that I will have many opportunities to go meet fans and enjoy together,” he said emphatically.

His return to the music scene is arguably one of the most eye-catching K-pop events for this year. As if to prove the point, his album sold 450,000 copies in presale. 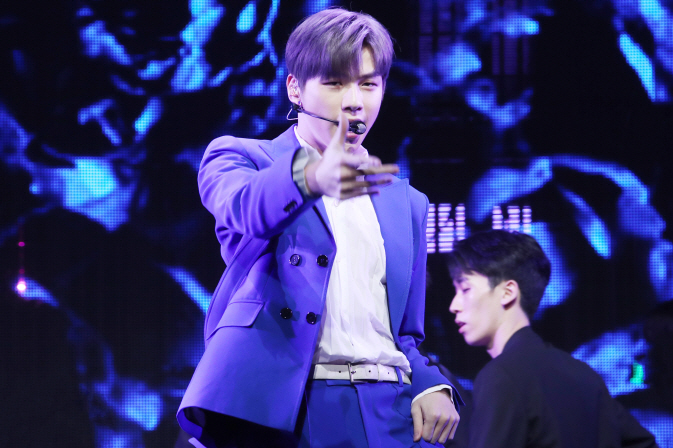 Kang is the last of the 11 members of Wanna One to resume his show business career after the high-profile band’s disbandment in January.

The 23-year-old wanted to inaugurate his solo career in April but was unable to do so, as he was trapped in a legal battle with his former management agency, LM Entertainment.

In May, the Seoul Central District Court cleared a legal hurdle for him in pursuing a career outside of LM and Kang set up his own management agency, Konnect Entertainment, last month.

“I was sorry to my fans, having to leave the scene for six months without any news and I am blown away by their support,” Kang noted.

“This album is a special one, rather than a regular EP, for those waiting fans … I could have come up with a full-length album, but I wanted to come back as soon as possible,” he said.

His music activities promoting the new album on TV could, however, be subject to some difficulties as some cable channels or talent agencies, entangled in the legal battle with Kang’s side, could prevent his from appearing on TV.

The association of talent managers reportedly made a decision earlier this month to ostracize Kang’s manager.

“My management team had little time to discuss (schedules) with broadcasting firms as we had a short time span to prepare this album. I hope I can come up with good news in the very near future,” he said.

Kang said that going forward, he wants to be an inspiring artist who sends out self-help messages.

“I wanna be a person from who you could get hope when you think about me, provoking the message ‘Look at Kang Daniel work hard. I will work hard too,’” he said.

His release of the new album on Thursday will be followed by his overseas fan-meeting tour, which will kick off in Singapore on Aug. 16 and then move to Hong Kong on Aug. 18.

Konnect said it will announce a full list of the tour’s destinations in the future.