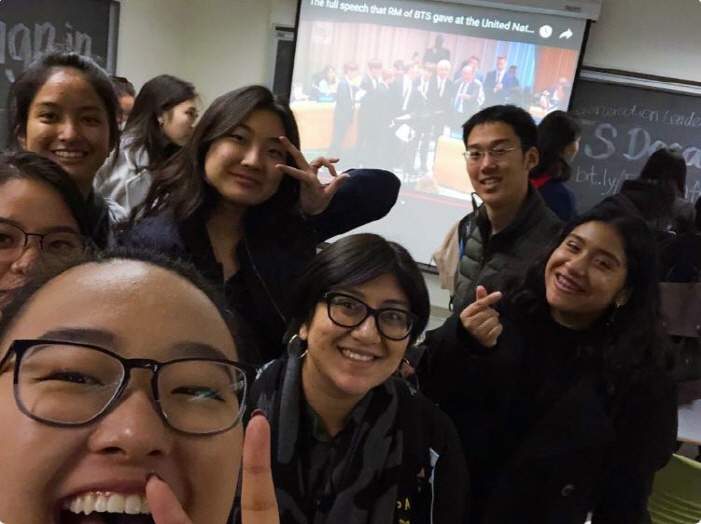 Students taking the course “Next Generation Leaders: BTS” at the University of California, Berkeley. (image: Yonhap)

SEOUL, Feb. 7 (Korea Bizwire) — A student-run academic course has been launched at the University of California, Berkeley, to explore the phenomenal success of K-pop boy band BTS and its growing global impact, the school’s website showed Thursday.

Under the program, students create and facilitate their own classes on a variety of subjects, according to the program’s official web page. The BTS class opened in the media category.

“This course will focus on Korean boy group, BTS, and their global impact. We will attempt to explore the group’s history, artistry, philanthropy, and many other aspects in order to analyze their growing impact in society as well as their international success,” according to the web page.

“Additionally, we will dive into the intricate world they have created through their album concepts and videos, also known as, ‘Bangtan Universe.’”

“We will also look at media texts like articles, interviews, and the group’s own music videos to allow students to think critically and create their own theories about the group’s success,” it said.

A photo of the course’ orientation session, held on Feb. 5 (U.S. time), was uploaded on the course’s Twitter account, showing the enrolled students watching a video of BTS’ acclaimed speech during a United Nations General Assembly session in September.

The speech, with a message of “love yourself”, conveyed by team leader RM, inspired a wave of fans across the world.

BTS will soon travel to the U.S. to attend this year’s Grammy Awards. The band will be award presenters during the event slated for Sunday at the Staples Center in Los Angeles.