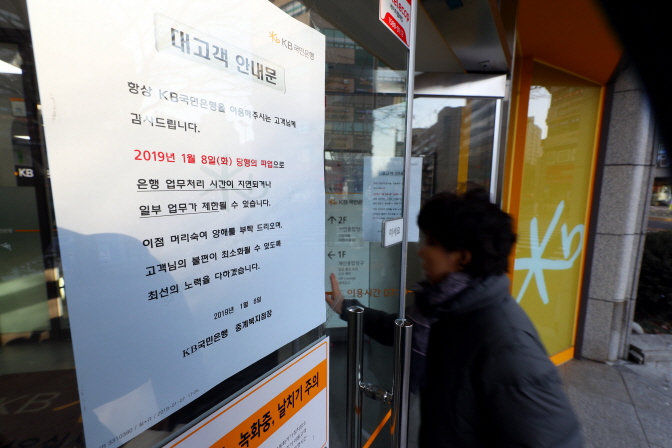 A notice is posted at a Seoul branch of KB Kookmin Bank on Jan. 8, 2019, informing customers of a union strike. (Yonhap)

The one-day walkout started at 9 a.m., as last-minute overnight negotiations between the labor and the management did not lead to a breakthrough.

The last time unionized workers took collective action was in 2000, when the bank acquired the Housing & Commercial Bank.

The exact numbers of participants and branches affected were not known, but the union said some 9,000 members joined the collective action, which crippled operations at around 600 out of 1,057 outlets across the country.

As part of an effort to minimize inconvenience to customers, the bank designated some 400 branches as so-called central outlets to deal with tasks of nearby affected branches, while encouraging customers to use online and mobile services, according to the lender.

As of end-November, the major lender had 31.1 million customers, equal to some 60 percent of the country’s total population.

Some customers complained about being unable to carry out their banking tasks at brick-and-mortar branches, but no major problems were reported, the lender noted.

The union wrapped up the strike at around 2 p.m., but has vowed to launch several more rounds of short-term strikes unless an agreement is reached with management.

The walkout came as 96 percent of some 12,000 unionists voted in favor of the action last month, after their negotiations with management over key labor issues, as well as arbitration attempts by the National Labor Relations Commission, went nowhere.

The two sides have not budged an inch over the introduction of the wage peak system in which employees get reduced salaries for several years right before retirement.

While the union calls for the starting age for the wage peak system to be delayed by one year, the management has insisted on a swifter introduction, as well as the unification of the rules for senior and junior employees.

The two sides also remain at odds over the so-called pay band system that limits wage increases in case a worker fails to be promoted during a certain period of time. The union calls for its abolishment, which has been in place for new employees since 2014, while the management wants to expand its scope.

As for the annual bonus, the company has agreed to accept the union’s demand of giving the amount equivalent to 300 percent of their basic monthly wages, up from its own proposal of 200 percent.

But it attached strings, including the union’s acceptance of its proposal regarding the wage peak and other payment systems, a suggestion dismissed by the union.

KB Kookmin Bank is the country’s No. 1 commercial lender in terms of profits. As of the third quarter of last year, it had logged 2.08 trillion won (US$1.86 billion) in accumulated net profits for the year, outrunning former champion Shinhan Bank to reclaim its previous title as the nation’s leading bank.

“We will strive not to go on strike again … We are willing to sit down at the negotiation table all day and every day,” union leader Park Hong-bae told reporters.

“Along with the union-management talks, we are thinking of seeking third-party arbitration,” he added.

Though management did not officially comment on the strike, Kookmin Bank chairman Hur Yin on Monday stressed the need for “a reasonable reform of the wage peak system,” while pledging to hold proactive discussions with the union aimed at the improvement of treatment for the lowest-ranking workers.

Also on Tuesday, financial authorities held an emergency meeting to discuss ways to reduce inconvenience caused by the bank’s strike.

Kim Yong-beom, vice chairman of the Financial Services Commission (FSC), told the meeting that the FSC is closely monitoring the situation to minimize fallout to customers.

In a statement, Kim voiced his “regrets” over the strike, urging the bank and its labor union to bridge differences through dialogue.