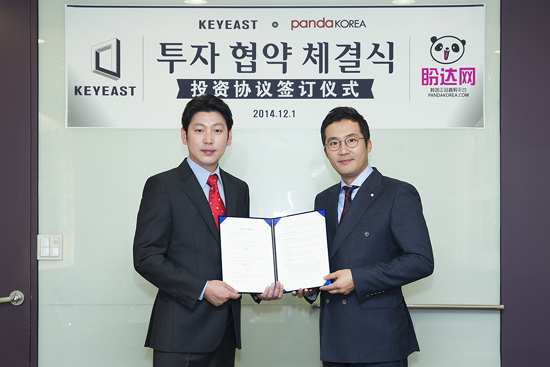 Thanks to the agreement, KeyEast now has a reliable distributor in the Chinese market. (image: KeyEast)

SEOUL, Dec. 2 (Korea Bizwire) – Korean management agency KeyEast and Pandakorea.com, which sells Korean products to foreigners, have joined hand in hand to expand their business in the Chinese market. The star agency for many Korean actors and actresses including Kim Su-hyun, Bae Yong-jun and Han Ye-seul decided to invest 3.3 billion won, equivalent to US$2.99 million, in the online shopping mall for Chinese consumers, becoming the second stockholder following Lee Jong-sik, CEO of the Korean item distributor to China.

Thanks to the agreement, the management company now has a reliable distributor in the Chinese market. Earlier, the agency signed an agreement with Sohu.com, one of the largest portal sites in China, this August. The Chinese website became another stakeholder of KeyEast to provide Korean cultural content such as TV dramas, films and games, starring Kim Su-hyun and other Korean stars, to Chinese customers.

Under the terms of the latest agreement, the two companies plan to cooperate in various areas, including developing private brand products featuring Korean stars, promoting K-dramas and K-games in China, and publicizing items starring Korean actors and actresses. In particular, Pandakorea will benefit from its right to exclusively sell private brand items featuring Actor Kim Su-hyun, who has a huge number of Chinese fans, through its website.

Pandakorea.com is a website selling popular Korean items to Chinese customers. As soon as it launched in October, it generated considerable media attention not only in Korea, but also in China. An increasing number of visitors have purchased Korean items through the website, and the company plans to enter the Vietnamese and Thai markets next year.

“Pandakorea.com can be an example to show that small Korean companies are able enough to achieve success in the global market. Based on the agreement with one of the best star agencies in Korea, we will become a Korean version of Alibaba by providing popular Korean items featuring a variety of Korean celebrities to foreign consumers,” Lee said.