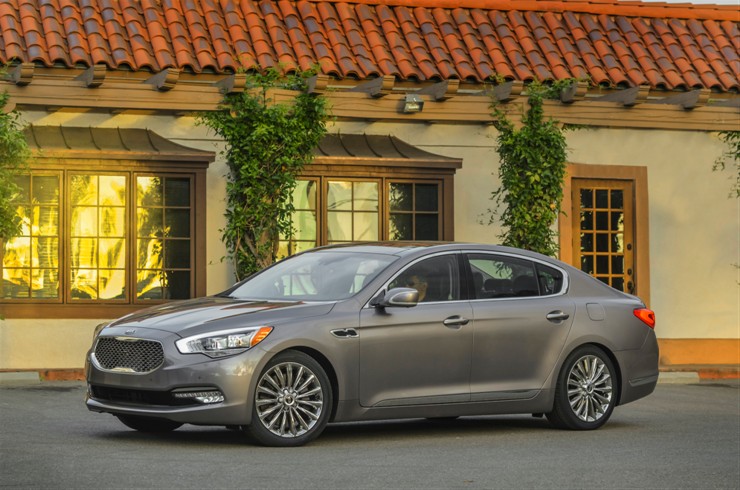 IRVINE, Calif., Apr. 17, 2014 (Korea Bizwire) — AutoTrader.com has named the 2015 Kia K900[1] and 2014 Kia Soul to its prestigious list of 2014 “Must Test Drive” vehicles.  Kia joins AutoTrader.com’s select collection for the first time in 2014 and is one of only three brands to have more than one vehicle on the list, which covers cars, trucks, vans and SUVs.  The AutoTrader.com editors look for that “something special” in each vehicle selected, and the K900 and Soul wowed them with unexpected amenities, outstanding design and tremendous value within their respective segments.

“The Kia brand has always challenged convention and has consistently redefined the notion of what value means since entering the U.S. market 20 years ago,” said Michael Sprague, executive vice president of sales & marketing, Kia Motors America (KMA). “To be recognized by the editors of AutoTrader.com for our new luxury flagship sedan and our wildly popular affordable halo vehicle is a clear indication that our products continue to surprise and delight today’s new-car buyers with a perfect balance of world-class design and quality, user-friendly technology and amenities, as well as value.”

To be selected for the AutoTrader.com 2014 Must Test Drive accolade, vehicles must be available for sale by October of 2014, be widely available for sale in the U.S. (at least half of the 50 states), have a base price under $75,000 and be produced (or planned to be produced) in volumes of 10,000 or more.  The judging criteria focused on four key attributes: value, comfort, performance and style.  Vehicles that were selected to the AutoTrader.com 2014 Must Test Drive list where those that had to be driven to be fully appreciated and offered something unexpected that would surprise car shoppers, particularly those who may not have previously thought to consider that brand or model before.

K900 is an unexpected surprise
The all-new 2015 K900 challenges the rear-drive luxury sedan segment with an extensive list of standard equipment, world-class accommodations, premium driving dynamics and stunning design that redefines consumer perception and expectations of the Kia brand.

“The Kia K900 is a Must Test Drive car simply because it’s so unexpected. We know the average large luxury sedan buyer may not be thinking of Kia, but they should be,” said AutoTrader.com site editor Brian Moody.  “The K900 is good looking, but with a more youthful appearance than other big luxury cars.  If you’re shopping for one of these sedans, you owe it to yourself to test drive the Kia K900, as well.”

Offered with a V8 engine in Luxury and VIP trim levels, the K900′s list of standard equipment features first-class accommodations and advanced technology.  The range-topping V8 equipped with the VIP Package adds additional luxury amenities including reclining outboard rear seats.  The all-new K900 V8 Luxury and V8 VIP are on sale now with a V8 Luxury model starting at $59,500 excluding $900 in destination charges[2].

A street Soul named desire
The totally transformed Soul design is instantly recognizable yet thoroughly fresh, with more than a passing nod to the hot Track’ster concept that was unveiled in 2012.  Riding on a new chassis that is stiffer, longer and wider, the all-new Soul has grown up without losing its edge, allowing for more passenger and cargo room while reducing NVH levels. A flatter torque curve and significant suspension upgrades make the 2014 Soul a nimble and agile companion in congested urban environments.

“The Soul is on our Must Test Drive list because it really isn’t just another small SUV.  Many of these little cars use a certain cute factor to hide a low-budget interior, not the Soul,” said Moody.  “With notable options like navigation, streaming audio, Infinity sound, heated and ventilated front seats, heated rear seats and a huge panoramic sunroof, the Kia Soul is anything but just another affordable subcompact.”

Honoring Soul owners’ fierce individualism, three unique trim levels are available: Base, Plus and Exclaim.  With a base price of just $14,900 excluding the $795 destination charge2, the Soul has become the brand’s top-selling subcompact vehicle since going on sale late last year.

Kia Motors America (KMA) is the marketing and distribution arm of Kia Motors Corporation based in Seoul, South Korea.  KMA proudly serves as the “Official Automotive Partner” of the NBA and LPGA and surpassed the 500,000 annual sales mark for the second consecutive year in 2013 following the launch  of seven all-new or significantly redesigned vehicles.   KMA offers a complete line of vehicles, including the rear-drive K900 flagship sedan, Cadenza premium sedan, Sorento CUV, Soul urban passenger vehicle, Sportage compact CUV, Optima midsize sedan, Optima Hybrid, the Forte compact sedan, Forte5 and Forte Koup, Rio and Rio 5-door sub-compacts and the Sedona minivan, through a network of more than 765 dealers across the United States.  Kia’s U.S. manufacturing plant in West Point, Georgia builds the Optima* and Sorento* and is responsible for the creation of more than 14,000 plant and supplier jobs.

One thought on “Kia K900 And Soul Named “Must Test Drive” Vehicles For 2014 By AutoTrader.com”