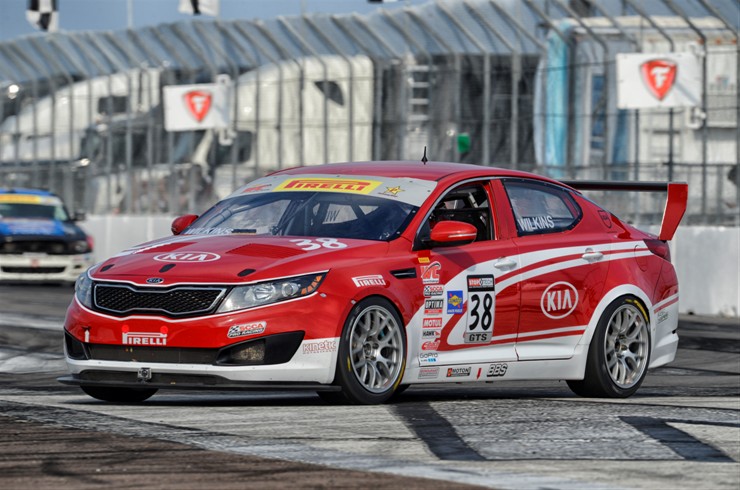 IRVINE, Calif., March 27, 2014 (Korea Bizwire) – After burning the midnight oil during an extremely busy off-season, Kia Motors America (KMA) and its racing partner Kinetic Motorsports are ready to kick off the 2014 Pirelli World Challenge (PWC) campaign on the Streets of St. Petersburg, Fla., with an action-packed double-header weekend alongside the warm waters of Tampa Bay.  The team is coming off successful 2013 season – its second in the PWC – in which Kia finished second in the Manufacturer’s Championship and Kia Racing pilot Mark Wilkins took third in the Driver standings on the strength of two wins and six podium finishes.  Celebrating its twentieth year in the U.S. market and only its fifth season in professional sports car racing, Kia is a young brand looking to make its mark among some of the sport’s best.

“With four wins and 12 podiums over the last two seasons, Kia Racing has transformed from series interloper to championship contender in a very short time,” said Michael Sprague, executive vice president of sales and marketing, KMA.  ”The Pirelli World Challenge is a world-class battleground for legendary automotive brands and top-flight drivers, which makes it the perfect arena to measure ourselves against the best in the business and showcase the quality, durability and performance of our turbocharged Optimas.”

Almost from the moment the checkered flag dropped at the PWC finale in Houston last October, the team’s shop in Buford, Ga., was buzzing with activity.  The Kinetic Motorsports engineers stripped both cars down to bare chassis, assessed each for damage sustained during the long season of brutal PWC competition and meticulously rebuilt them.  With both cars reassembled, the focus turned to the off-season development effort, a search for efficiencies as they optimized vital components with emphasis on the suspension and braking systems.  Over the next few months the Kinetic Motorsports team conducted experiment after experiment, poring over data in search of the performance gains large and small.  After multiple on-track testing sessions during the long winter months, the team has emerged confident and ready for rounds 1-2 at St. Petersburg, Fla., on March 29-30.

The pursuit of victory is a shared passion at Kia Racing, but both drivers and crew will once again have the added motivation of racing for a cause. Charity partners DonorsChoose.org (www.donorschoose.org) and B.R.A.K.E.S. Teen Pro-Active Driving School (www.putonthebrakes.org) will be prominently featured on the No. 36 and No. 38 Optima turbos, respectively, again in 2014.  The KMA partnership with innovative online charity DonorsChoose.org has provided school supplies to nearly 1.5 million high-need public school students across America since its inception in 2012. With help from Kia dealers and thousands of “citizen philanthropists,” KMA’s total impact on public education has surpassed $5 million.

KMA’s partnership with the B.R.A.K.E.S. Teen Pro-Active Driving School is also in its second year.  B.R.A.K.E.S. provides free, hands-on defensive driving instruction for teens nationwide.  As the presenting sponsor and Official Vehicle of B.R.A.K.E.S., KMA donated a fleet of 32 vehicles to be used by teenagers ranging between 15 to 19 years old as they learn to respond to real-world driving scenarios.  The No. 38 turbocharged Optima turbo proudly wears the B.R.A.K.E.S. logo on the hood to help build awareness for this worthy cause.

Race fans can watch live coverage of the races online at www.world-challengetv.com and catch the latest news and updates from the Kia Racing Facebook page at www.facebook.com/kiaracing and follow the team on Twitter: @KiaRacing.

About Kia Motors America Kia Motors America (KMA) is the marketing and distribution arm of Kia Motors Corporation based in Seoul, South Korea.  KMA proudly serves as the “Official Automotive Partner” of the NBA and LPGA and surpassed the 500,000 annual sales mark for the second consecutive year in 2013 following the launch  of seven all-new or significantly redesigned vehicles.  KMA offers a complete line of vehicles, including the rear-drive K900 flagship sedan[1], Cadenza premium sedan, Sorento CUV, Soul urban passenger vehicle, Sportage compact CUV, Optima midsize sedan, Optima Hybrid, the Forte compact sedan, Forte5 and Forte Koup, Rio and Rio 5-door sub-compacts and the Sedona minivan, through a network of more than 765 dealers across the United States.  Kia’s U.S. manufacturing plant in West Point, Georgia, builds the Optima* and Sorento* and is responsible for the creation of more than 14,000 plant and supplier jobs.