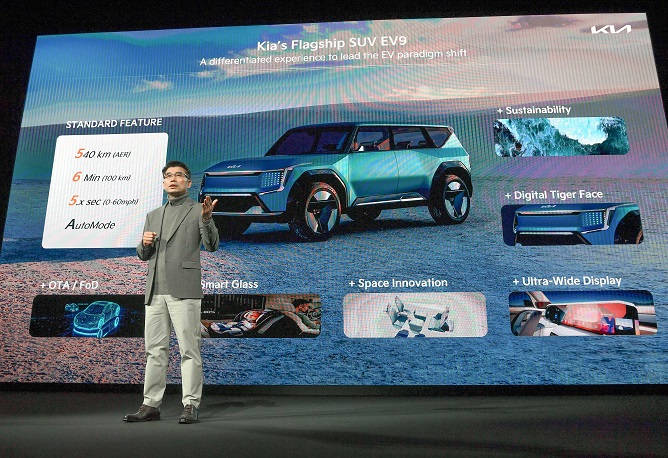 Kia President and Chief Executive Song Ho-sung delivers a briefing on the company’s 2030 EV strategy during this year’s CEO Investor Day held online at its headquarters in Yangjae, southern Seoul.

To beef up the EV lineup and achieve the sales target, Kia will invest 28 trillion won (US$23 billion) in future mobility solutions by 2026, Kia President and Chief Executive Song Ho-sung said on this year’s CEO Investor Day.

“We will focus on increasing sales of EVs in four major markets — South Korea, the United States, Europe and China, where demand for EVs is on the rise and regulations are getting stricter against combustion engine cars,” Song said.

Kia plans to produce localized EV models in its global factories in Europe, the U.S., China and India, with its facilities and personnel in South Korea serving as a hub of EV development and production, he said.

It plans to introduce the flagship EV9 sport utility vehicle next year and electric pickup trucks and other EVs until 2027.

Kia said pure electric vehicles will account for 30 percent of its global sales target of 4 million units for the year of 2030. The 2030 global target is 27 percent higher than 3.15 million units sold last year.