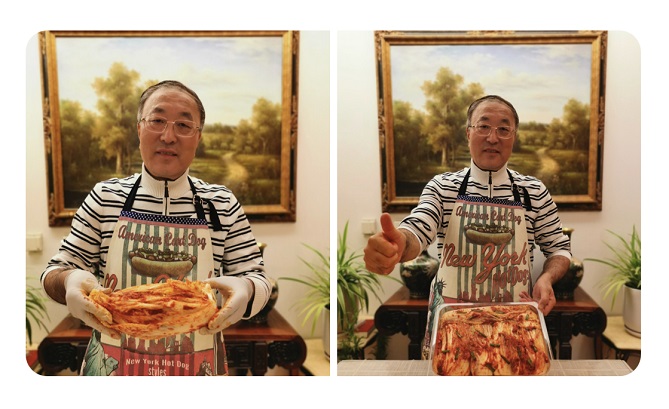 Chinese Ambassador to the United Nations Zhang Jun posted a photo of himself holding up kimchi on his Twitter account.

SEOUL, Jan. 14 (Korea Bizwire) — The Chinese ambassador, as well as a famous food blogger in China were shown on social media making Korean kimchi, rekindling the Korea-China debate over the origin of kimchi.

Chinese Ambassador to the United Nations Zhang Jun posted a photo of himself holding up kimchi on his Twitter account on Jan. 3, prompting Korean netizens concerned about the spread of false information to post comments emphasizing the fact that kimchi is from South Korea.

Kimchi is a traditional Korean side dish normally made of fermented cabbage, salt and hot peppers.

Some point out that the Chinese ambassador’s move to make kimchi, particularly at a time when the Chinese press has been spreading false information about the origin of kimchi, is too timely to be seen as coincidental.

Li Ziqi, a Chinese YouTuber followed by 14 million people, sparked controversy after adding a #ChineseFood hashtag on a video of herself making kimchi last week.

A Chinese YouTuber’s move to post videos about kimchi after Chinese state daily tabloid Global Times first sparked the controversy over its origin, is bringing many to believe that malicious intent is in place to steal Korean tradition and culture.

Chinese netizens, in response, are criticizing their Korean counterparts for putting up a fight for something insignificant, driving up tension between the two nationalities.