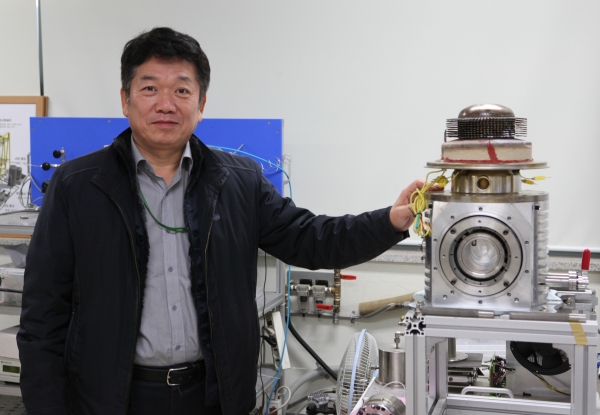 Park Seong-je of KIMM, who led the development said, “With the technology, it is expected that micro-sized cogeneration systems spreading among developed countries will be localized soon in Korea.” (image: Korea Institute of Machinery and Materials)

The Korea Institute of Machinery and Materials (KIMM) announced on November 27 that it had developed a Stirling engine generator capable of producing not only hot water, but also up to 1kilowatt of electricity from a home boiler.

Stirling engines, unlike internal combustion engines that generate power through ignition and explosion, use heat to produce power, and are called clean engines as they emit less noise and toxic gases. The Stirling engine, with a closed-cylinder filled with helium or hydrogen, operates pistons by heating the gases.

Park Seong-je of KIMM, who led the development said, “Recently, many people are interested in the cogeneration system due to energy shortages and environmental pollution. With the technology, it is expected that micro-sized cogeneration systems spreading among developed countries will be localized soon in Korea.”