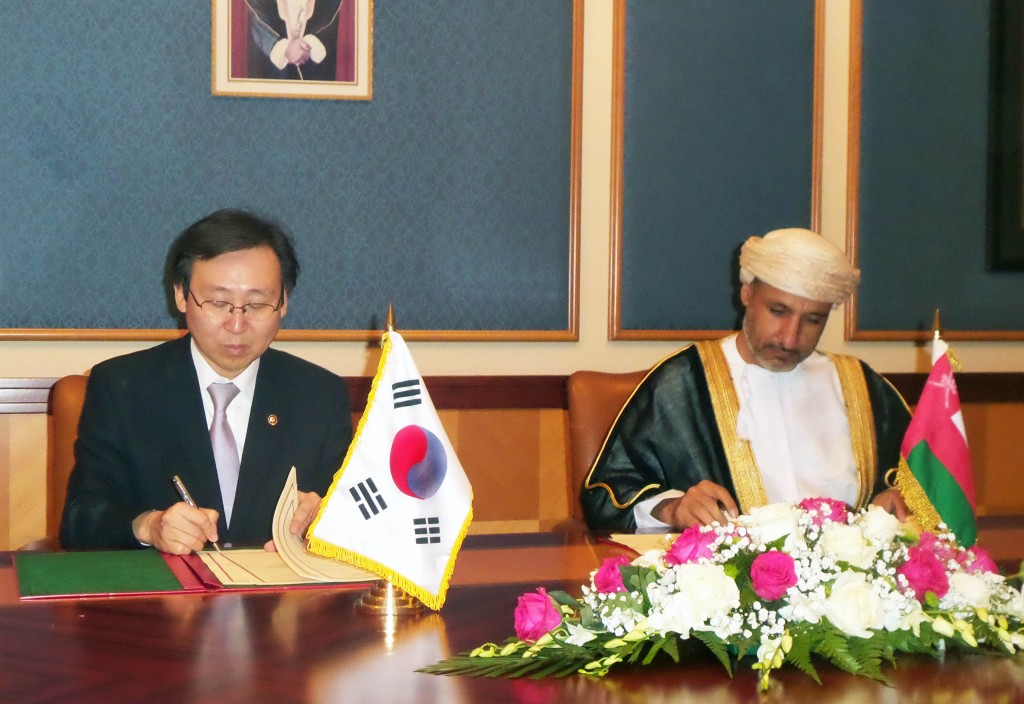 At the event, South Korean team expressed their keen interest in being part of Oman’s gigantic economic diversification projects which include the US$10 billion national railroad project, the US$6 billion Duqm petroleum refinery plant project and other big-ticket businesses. (image: Ministry of Trade, Industry and Energy)

SEOUL, Aug. 27 (Korea Bizwire) – South Korea is stepping up efforts to cash in on a new emerging market in the Middle East’s Oman: the infrastructure sector which is estimated to be worth US$30 billion.

Led by South Korean Deputy Minister Moon Jae-do, who is in charge of the Ministry of Trade, Industry and Energy, more than two scores of business delegates — from private and public sectors — participated in the fourth Korean-Omani Economic Forum held in Oman on Aug. 23. At the event, South Korean team expressed their keen interest in being part of Oman’s gigantic economic diversification projects which include the US$10 billion national railroad project, the US$6 billion Duqm petroleum refinery plant project and other big-ticket businesses.

The Sultanate of Oman is expected to invest about US$30 billion as part of its bold economic diversification policies and the Korean delegates used the forum to suggest a couple of proposals such as working level discussion to pave the way for Korean companies joining the attractive fray in the Oman’s core infrastructure fields; petrochemical, railway and health sectors.

Especially, Mr. Moon met with Salim bin Mohammed Al Nua’imi, undersecretary of the Ministry of Transport of Oman, and asked for his support so that Korean companies might gain more opportunities in the primed construction market in the Middle East’s new gem.

At the forum, the two countries agreed to continue working level discussions for the expansion of their economic cooperation into renewable energy, defense, health and finance sectors, and reciprocally, for the Oman’s participation into Korea’s East Asia Oil Hub project. In the meantime, they agreed to team up in their joint advancement into the third countries markets by making the most of strategic assets from both nations: financial capabilities of the sovereign wealth fund from Oman and the advanced expertise commanded by South Korea, which are best applied to construction sectors.

Mr. Moon said, “Our economic delegates visited Oman to commemorate the 40th anniversary of the diplomatic tie between the two countries, and Oman’s large scale projects are now beginning to flesh out to our understanding. Riding on this momentum of economic cooperation, the Korean government is committed to supporting the local companies so that they have an upper hand in the lucrative businesses in Oman.”