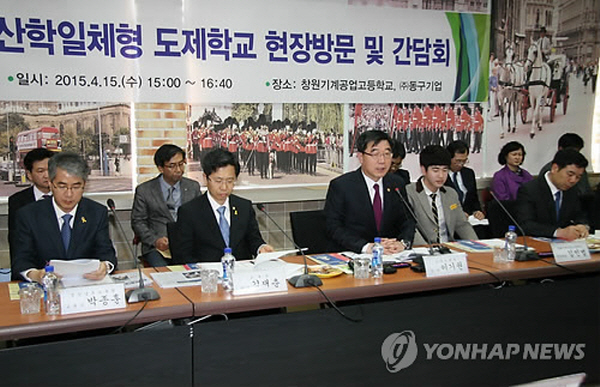 The Minister of Education said that the program would be the foundation for a society which values capacities, not degrees and educational backgrounds. (image: Yonhap)

SEOUL, Apr. 16 (Korea Bizwire) — Korea will have 41 ‘school-to-work’ high schools with an apprenticeship program similar to Switzerland’s by 2017.

On April 15, The Ministry of Education and The Ministry of Employment and Labor said that they have been operating the apprenticeship program at nine Korean schools since November 2014, and will continue to expand the program to a total of 41 schools.

The apprenticeship program offers high school students the opportunity to learn theory at school, and applied technology, as apprentices, at companies contracted to employ students after their graduation.

The Minister of Education said that the program would be the foundation for a society which values capacities, not degrees and educational backgrounds. Student representatives from the current program added that the system should be enhanced with more programs to efficiently make up for study time lost due to time spent working.

Parental representatives pushed for the apprenticeship program to be introduced at universities. They also suggested that the government could operate various expos where students, school officials and parents could learn more about what companies have to offer.