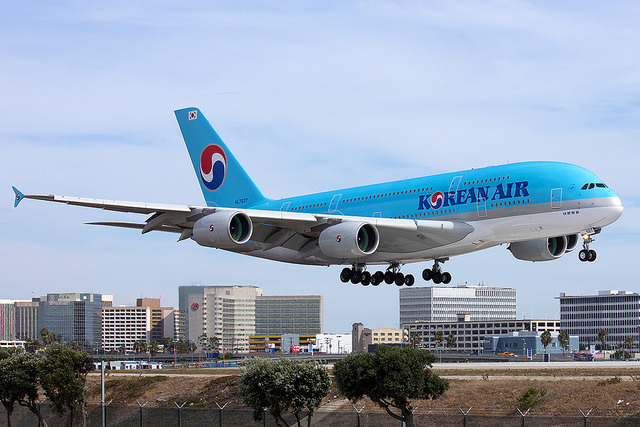 Korean Air ticket reservations are in decline, and its stock price is lagging behind its competitors ahead of the peak winter season. (image: Charlie_tj/flickr)

SEOUL, December 15 (Korea Bizwire) – After the Korean Air “nut incident,” where an airline executive kicked a crewmember off the plane after being improperly served macadamia nuts, the airline has suffered a deterioration of its corporate image, and falling business results.

According to recent figures, Korean Air ticket reservations are in decline, and its stock price is lagging behind its competitors ahead of the peak winter season.

Korean Air is said to be in a “state of emergency” as its seat reservation rate for overseas flights stood at 70 percent on December 10, compared to 86.9 percent for its main rival, Asiana Airlines.

According to the Seoul Regional Aviation Administration, Korean Air’s winter season load factor last year was 77.6 percent, only 5 percentage points behind Asian’s 82.8 percent. However, after the “nut incident,” the gap has widened to more than 16 percentage points this year.

The backlash following the incident was clearly reflected in the stock market. Despite falling oil prices and expected increases in demand, Korean Air shares only rose 9.3 percent, falling behind Asiana’s 24.4 percent rise during the December 8-12 period.

On December 14, Heather Cho (Cho Hyun-ah), the former Korean Air senior vice president at the head of the controversy, left an apology note for the head flight attendant that she kicked off the plane, after attempts to meet him in person were unsuccessful.