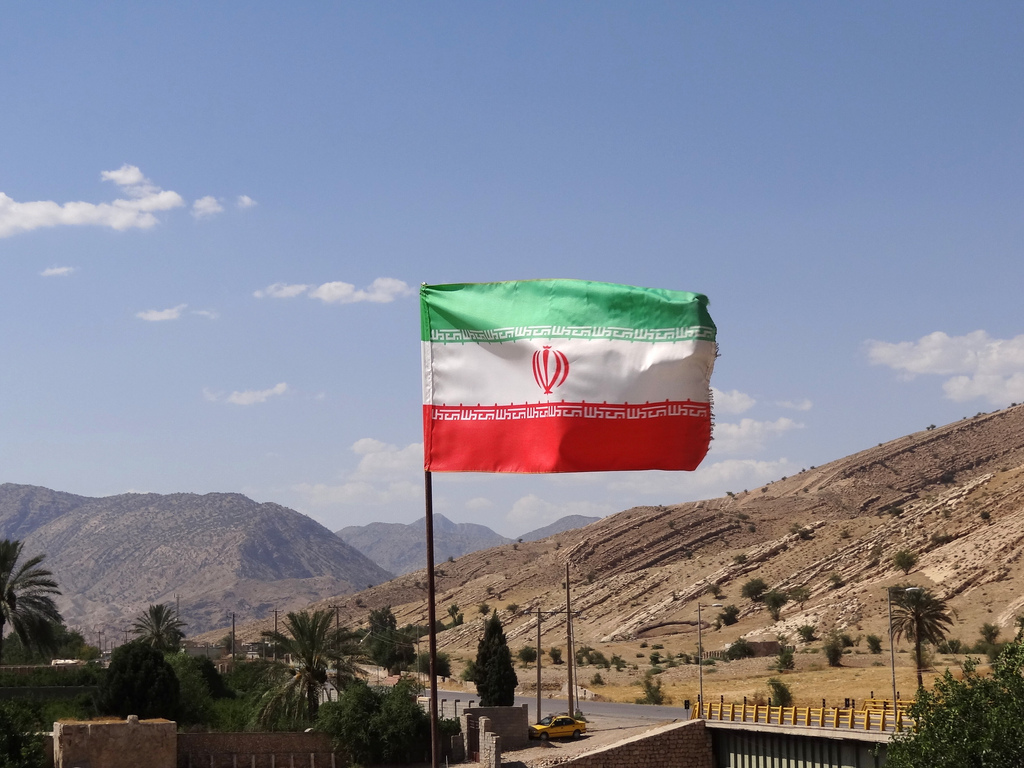 With a population of over 80 million, the Middle East country abounds in natural resources, holding the world’s fourth-largest oil reserves and the second-largest gas reserves. (image: Adam Jones/Flickr)

SEOUL, April 21 (Korea Bizwire) – South Korean companies are briskly moving to tap into Iran’s fast-growing construction and consumer markets, regarding the Iranian boom as a breakthrough to their prolonged business slump amid the global economic slowdown.

Local business executives expect that President Park Geun-hye’s visit to Iran slated for May 1-3, as well as the dispatch of a large-scale business delegation to Tehran, will provide fresh momentum to their inroads into Iran, which is in the midst of rebuilding its infrastructure following the lifting of Western sanctions.

The construction sector was quick to move as major builders are eyeing large-scale deals with Iran.

Trade firms have also been rushing to Iran. SK Networks, which handled about 14 percent of Iran-bound exports last year, increased the number of its local staff from nine to 13, with a plan to expand its business.

Shipyards are among those keenly interested in business deals with Iran. Hyundai Heavy Industries Co., a major shipyard here, is reportedly in talks with Iran’s state-run shipper IRISL on a deal to build three container ships for an estimated $350 million.

From May 1-3, President Park is to visit Iran for a summit with her Iranian counterpart Hassan Rouhani. The president is likely to be accompanied by more than 200 businesspeople from such areas as construction, energy, finance, shipping and steel.’

Her visit, the first of its kind by a South Korean president since the two sides established diplomatic relations in 1962, comes as Iran has been emerging as a high-potential market after years of international sanctions were lifted in January.

“Relevant government agencies are now making all-out efforts to ensure that the summit talks could lead to more orders and exports in the Iranian market,” a government official said on condition of anonymity.

With a population of over 80 million, the Middle East country abounds in natural resources, holding the world’s fourth-largest oil reserves and the second-largest gas reserves. In the past decades, South Korean builders had clinched deals worth US$12 billion with Iran, but since 2009 there have been few deals, due mostly to the economic sanctions that the United Nations imposed on the country for its nuclear weapons program in 2010. 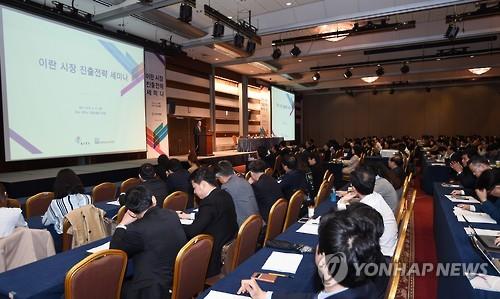 A Korea International Trade Association seminar on the inroads into the Iranian market is under way at COEX in southern Seoul on April 21, 2016, drawing a large number of officials from the South Korean business sector. (Yonhap)

A World Bank report earlier forecast that its economy will grow 5.1 percent and 5.5 percent this and next year, respectively, possibly turning around the negative growth seen in the previous two years.’

South Korea once enjoyed active trading with Iran before the crippling sanctions were imposed on Tehran. Government data showed that South Korea’s exports to Iran hit an all-time high of US$6.26 billion in 2012 but it had nearly halved to $3.76 billion last year.

Talks have been actively underway between the two countries to put their economic and business ties back on track in many areas.

In late February, both held a meeting of a joint commission for economic cooperation in Tehran and agreed to expand cooperation in infrastructure including power plants, petrochemical factories, dams and railways. This raised hopes that construction might be one of the key areas that could benefit from the opening of the Iranian market.

“South Korea will push for partnership and cooperation with Iran from a long-term perspective,” Joo Hyung-hwan, South Korean minister of trade, industry and energy, said at the meeting. He cited three major fields: Iran’s campaign to restructure its industry, the nation’s efforts to improve welfare services including healthcare and education, and the joint development of social overhead capital.

In one of close to 300 potential deals discussed, POSCO Energy Co., a unit of South Korea’s top steelmaker POSCO, signed a memorandum of understanding with Iranian steelmaker PKP to build an off-gas power plant in the Middle Eastern country.’

“In particular, the construction sector will likely get a boost from the opening of the social overhead capital in Iran,” said Hong Joon-pyo, a researcher at Hyundai Research Institute, a private think tank.

“We expect the president’s visit to resolve sensitive issues and break any logjam… What the president has to do is to reduce risks and uncertainties facing businesses seeking to enter the market,” he added.

During her stay in Iran, talks will likely be held about cooperation in the energy sector and more specifically the construction of hospitals and multi-purpose dams and seaports there, sources said.

Bracing for increasing exchanges going forward, both sides are expected to discuss ways to build settlement systems using such currencies as the euro and the renminbi to facilitate their bilateral trade, which has been hampered by sanctions, they added.

The corporate circle seems to be keenly interested in the president’s trip to Iran, with the sights trained on their own possible business opportunities.

The list of companies joining the delegation has not been finalized but the number will likely grow to over 300, industry sources said. It would be more than three times larger than a similar delegation led by the commerce minister who visited Iran in late February.

According to media reports, high-ranking officials from such large business groups as SK, Hanjin and KT Corp. have already expressed their wish to join as they are seeking deals in each of their interested areas including energy, airline and telecom.