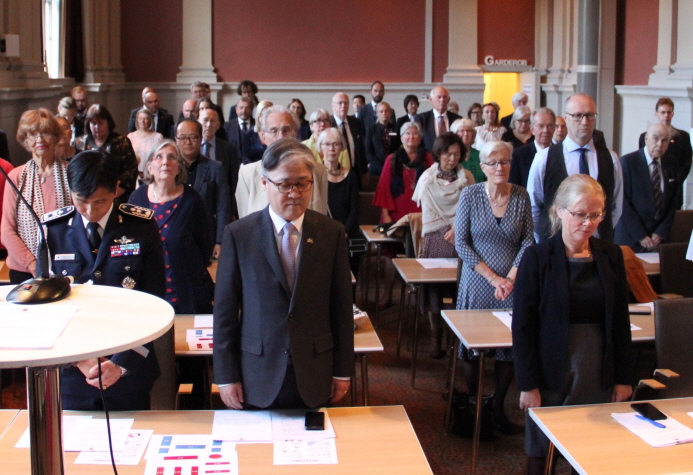 The event was held in time for the anniversary of September 23, which was the day Swedish soldiers landed in Busan. (image: The Korean Embassy in Sweden)

SEOUL, Sept. 28 (Korea Bizwire) — The Korean Embassy in Sweden revealed yesterday that it had held an event on September 24 at a conference center in Stockholm during which Lee Jeong-kyu, the ambassador of Korea to Sweden, expressed gratitude to Sweden for its participation in the Korean War.

The event was held in time for the anniversary of September 23, which was the day Swedish soldiers landed in Busan.

Over 100 Swedish Korean war veterans, their families and government officials were present at the event.

In his opening speech, Ambassador Lee stated that friendship and trust that had formed thanks to the dedication of the Swedish soldiers would contribute to the continuation of world peace.

When the Korean War broke out in 1950, Sweden decided to dispatch medical support to South Korea, sending 1,146 doctors, nurses, and soldiers who then treated UN troops, Korean soldiers and civilians at field hospitals.

After the ceasefire, Swedish medical officials, along with Norwegian and Danish officials, helped open a medical facility which later became the Korea Medical Center.