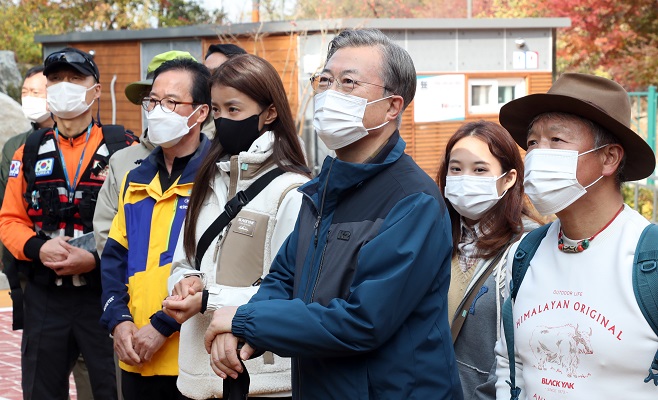 President Moon Jae-in (C) is briefed by Chung Jae-suk, the chief of the Cultural Heritage Administration, on Oct. 31, 2020 on the plan to open a trail route on the northern side of an ancient fortress wall on Mount Bukak, just behind the presidential compound in Seoul, to the public starting in November. (Yonhap)

SEOUL, Oct. 31 (Korea Bizwire) — President Moon Jae-in on Saturday went trekking on a trail course and unlocked the gate to the route, 52 years after it was declared off-limits for security reasons.

The hike came two days after Cheong Wa Dae announced plans to open the northern side of an ancient fortress wall on Mount Bukak, just behind the presidential compound in Seoul, to the public starting in November.

The 1.1 million-square-meter mountain, 4.8 times bigger than Yeouido in western Seoul, is known for well-preserved trail courses.

The area was designated as a no-entry place following the so-called Jan. 21 incident in 1968.

At the time, 31 North Korean commandos sneaked onto the 342-meter-high mountain and approached Cheong Wa Dae in an apparent attempt to assassinate then-President Park Chung-hee. 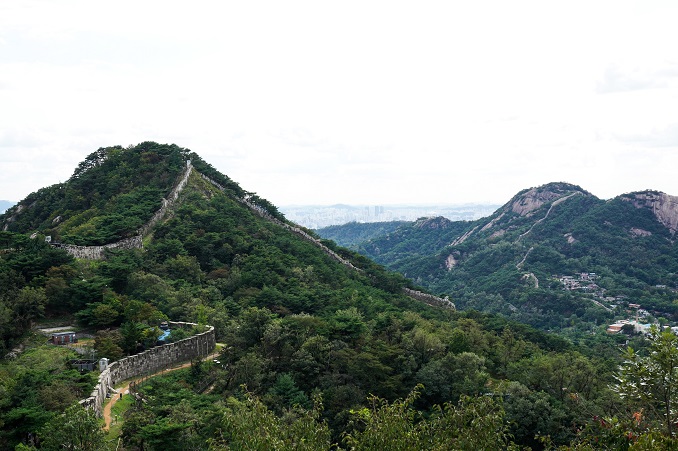 A view of a Mount Bukak trail course to be open to citizens, in this photo provided by Cheong Wa Dae.

Moon, who was accompanied by mountaineer Um Hong-gil, actress Lee Si-young and residents of Buamdong, a neighborhood near the trail course, walked to an entrance to the route and opened the steel gate that had been closed for decades.

“Only the trail course that follows the fortress wall has been opened for now, but the plan is to wholly open the area north of Cheong Wa Dae by 2022,” Moon said.

He added that “the guarding (of the area) should be heightened in a more scientific way,” mentioning that the opened area is important not only for the security of the presidential compound but also for airspace security.

The trail route opening is the latest in Cheong Wa Dae’s move to fully open the mountain to the public by the first half of 2022, which was one of Moon’s presidential campaign pledges.

The Moon administration has opened several areas near the presidential compound to the public since 2017.

Shortly after the launch of the Moon administration in May 2017, Cheong Wa Dae took a measure to allow ordinary people to walk right in front of the presidential compound at any time of day.

In 2018, it lifted all remaining curbs on hikers’ entry on the nearby mountain of Inwang.