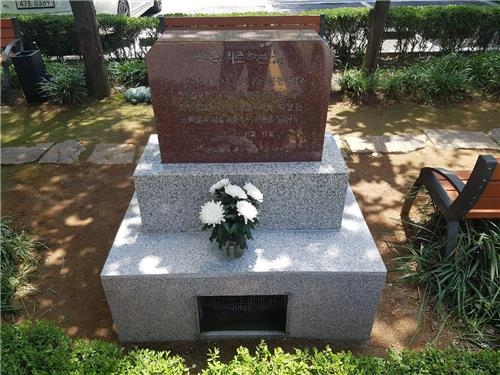 INCHEON, Jul. 18 (Korea Bizwire) — A “consolation memorial for animals” formerly taken down from its original location at Incheon’s Dong-gu Office has been restored four years after its removal.

The local government revealed yesterday that it had restored the memorial structure to its original state at the resting area of the office’s parking lot.

The structure measuring 60 cm x 50 cm x 10 cm in size was “constructed to comfort the spirits of animals that were sacrificed at the slaughterhouse between 1930 and 1963 before it made way for the newly expanded government office,” according to a plaque on the memorial.

The monument was erected in 1990 by former district (gu) chief Park Yeon-su before it was taken down and buried underground by former chief Lee Heung-su in 2014 after a religious group complained that the monument was “grotesque.”

When it was taken down, civic groups protested against the move, saying that it was regrettable that a piece of local history was being erased.

Heo In-hwan, the new district chief, was aware of the developments concerning the memorial, and had the structure pulled out from underground and restored to its original location.

According to historical documents, the current office space of Dong-gu Office previously housed the Incheon City Slaughterhouse, which was under operation for 51 years between 1912 and 1961, although the exact dates of operation differ slightly depending on the source.

On average, 6,000 pigs and cattle were slaughtered yearly at this location. The slaughterhouse was relocated to other neighborhoods such as Hangik-dong and Galsan-dong after the Dong-gu Office took over in 1963.

At present, the butchery is located in Bupyeong-gu’s Sipjeon-dong after being privatized. An official at the Dong-gu Office said that the new chief had worked as a civil servant in the district for 24 years and knew about the memorial.

“It was Mr. Heo’s wish to restore the memorial to make the public aware of the historical fact and to help people understand the importance of life,” said the official.