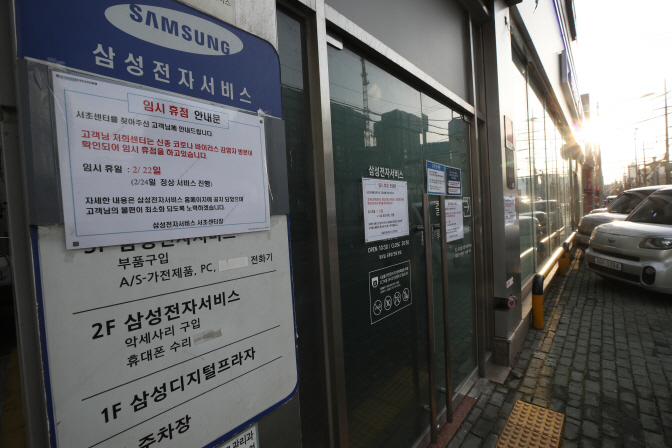 SEOUL, Feb. 24 (Korea Bizwire) — South Korean companies said Monday they are on full alert to minimize any possible fallout from the novel coronavirus as the potentially fatal illness spreads quickly within the country.

South Korea on Sunday raised the virus alert level to “red,” the highest in its four-tier system, following a spike in the number of coronavirus infections.

The country so far has reported more than 830 confirmed cases, with more than 80 percent of them identified in the last four days.

As new cases soar, South Korea revised its public health guidance, ordering people with fever or respiratory symptoms to stop going to schools and companies and refrain from going outside.

Most cases occurred in the southeastern city of Daegu and surrounding North Gyeongsang Province.

Some local firms already reported that they had to temporarily shut down their manufacturing facilities there.

Samsung Electronics Co. said it had to temporarily close its smartphone plant in Gumi, some 45 kilometers north of Daegu, after one of its employees there tested positive for the new coronavirus.

The company shut down the plant over the weekend to complete disinfection work and reopened the manufacturing site on Monday afternoon.

It instructed employees who made contact with the virus patient to put themselves in self-quarantine for two weeks.

GS Caltex Corp., the country’s No. 2 refiner, also had to temporarily shut down its research center in Daejeon over the weekend after one of its employees there was found to have had contact with a new coronavirus patient in Daegu.

The employee later tested negative for COVID-19, but the company had to disinfect its facilities.

LG Electronics Inc. said it decided to close a research office building in Incheon on Monday after a member of an employee’s family was confirmed as a new coronavirus patient.

SK hynix Inc., South Korea’s second-largest chipmaker, last week instructed some 800 workers at its Icheon campus, about 70 kilometers south of Seoul, to enter self-quarantine after a new recruit at the company was found to have had contact with a new coronavirus patient.

The employee later tested negative, but the company kept the quarantine measure for the workers.

“It seems that the novel coronavirus is spreading quickly across the country, and if manufacturing sites are contaminated, there will be production and supply disruptions,” said an official at a local electronics firm.

“We are doing our best with various quarantine measures to prevent the spread of the new coronavirus.” 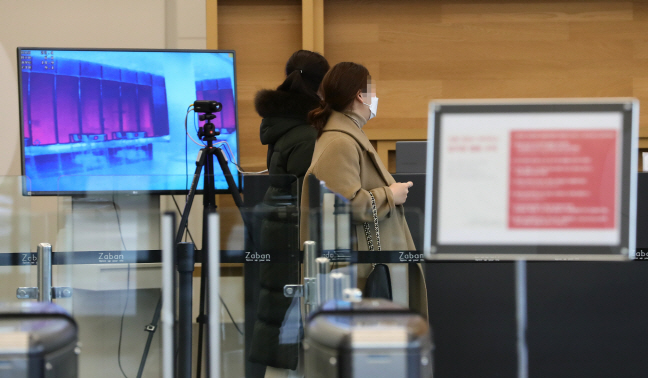 To protect their employees and manufacturing bases from the virus, LG Group affiliates, including LG Electronics and LG Display Co., said they have temporarily blocked those who live in Daegu and Cheongdo, North Gyeongsang Province, from entering their plants.

LG companies also asked all employees to limit domestic business travel, especially to Daegu and North Gyeongsang. Employees who had already visited those areas have been ordered to work at home, according to LG.

LG Display said it has instructed employees to install a self-diagnosis application on their smartphones. The app asks about their health status and indicates whether they have had contact with suspected or confirmed coronavirus patients.

Samsung Electronics said it has temporarily halted shuttle bus operations between its Gumi and Suwon plants, while ordering its employees to minimize person-to-person meetings.

All Samsung workers who are either pregnant or have a pregnant wife were also ordered to work at home at least until March 1.

SK Group, South Korea’s third-largest conglomerate, said six of its affiliates — including SK Innovation Co. and SK Telecom Co. — have allowed their employees to work from home for the next few weeks, although the exact period and scale of the remote-work system can differ from company to company.

To minimize contact with people on rush hour commutes, SK Innovation and SK Telecom on Monday advised their office workers to come to work by 10 a.m.

Some SK companies that have a shared-desk system in their workplaces also decided to halt the system for the time being to minimize their workers moving from seat to seat.

SK hynix said it gave special two-week leave to 300 workers who are either pregnant or have a pregnant wife, which allows them to rest until March 8.

The Korea Chamber of Commerce and Industry (KCCI), the country’s leading business lobby group, said it has recommended its 180,000 member companies use a work-at-home system and video conferences in their business operations.

The carmakers suffered production losses at domestic plants due to parts shortages, and are now expected to fill the output gap by extending work hours.

In the past two weeks, Hyundai and Kia partially operated their car assembly plants here as their suppliers in China couldn’t deliver parts due to the Lunar New Year break, which began on Jan. 24 and was extended by one week through Feb. 9.