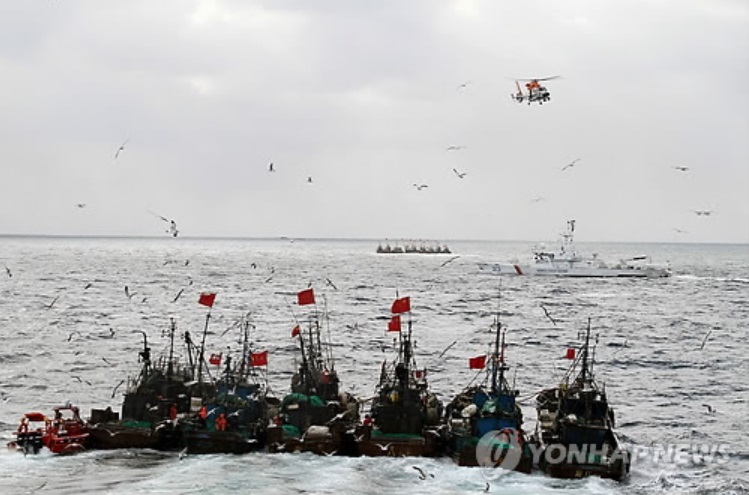 Amid growing anger and diplomatic protests over Chinese boats illegally fishing near the tense sea border, the South Korean Navy and Coast Guard set to step up operations to drive them away. (image courtesy of Yonhap)

BEIJING, June 11 (Korea Bizwire) – While China is trying to urge its fishermen to stop illegal fishing in the waters of neighboring countries, Chinese fishing boats continue to poach from other waters as fish stocks at home become depleted and Chinese authorities fail to strictly enforce rules.

In the Yellow Sea, Chinese boats illegally fishing in South Korean waters have been a source of diplomatic strain between the two nations over the past few years.

Frustrated by increased instances of poaching by Chinese boats in the rich fishing grounds of the waters near South Korea’s de facto maritime sea border with North Korea, South Korean fishermen impounded Chinese trawlers earlier this month and handed them over to South Korean authorities.

The neutral waters near the Northern Limit Line (NLL) in the Yellow Sea are banned from being entered because the area is a buffer zone between Seoul and Pyongyang. The area has also been the site of deadly naval clashes between South and North Korea.

Amid growing anger and diplomatic protests over Chinese boats illegally fishing near the tense sea border, the South Korean Navy and Coast Guard kicked off an operation on Friday to drive them away.

The military patrol was approved by the United Nations Command, which oversees the armistice agreement that ended the 1950-53 Korean War and supervises the neutral waters near the NLL.

China’s state-controlled media remained silent on Saturday about the operation by the South Korean military.

The Friday operation repelled about 10 Chinese boats from the waters, but there was no coverage on Chinese state-run media about the patrol.

In a faxed statement to Yonhap News Agency, China’s foreign ministry said Beijing has urged its fishermen to “uphold the normal order” in international waters.

Whenever the issue of illegal fishing by Chinese boats is raised, the Chinese government has said it will “strengthen the education” of its fishermen.

As fish stocks become exhausted because of overfishing at home, Chinese boats have been illegally fishing in the East China Sea, the South China Sea and even waters off the coast of West Africa.

In 2014, diplomatic tensions were heightened between the Philippines and China when 11 Chinese fishermen were detained by the Philippines on suspicions of illegally fishing in the country’s economic exclusion zone.

Last month, three Chinese ships and about 100 Chinese fishermen were detained while illegally fishing in waters near South Africa, according to media reports.