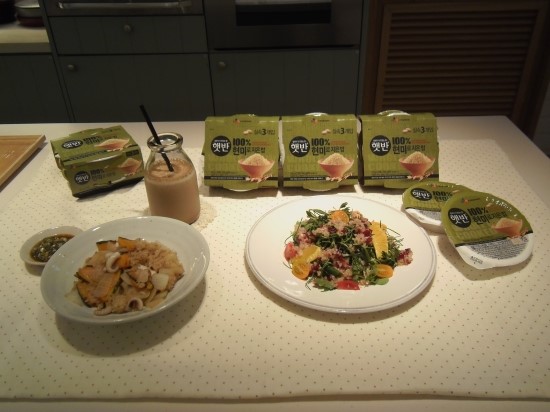 CJ Cheiljedang, one of the country’s biggest food and snack makers, is targeting the market with cooked rice and assorted toppings packed in a cup. (image: CJ CheilJedang)

SEOUL, Aug. 19 (Korea Bizwire) — South Korean retailers and food manufacturers are expanding their ready-to-eat meal products to cater to the country’s rapidly growing single households who opt to eat in, partly to save time and money, market watchers said Wednesday.

Retailers and food makers, in turn, are swiftly moving to increase their market share in the so-called “home meal replacement” segment, which includes products ranging from ready-to-eat loach soup to instant rice topped with Mapo Tofu.

CJ Cheiljedang, one of the country’s biggest food and snack makers, is targeting the market with cooked rice and assorted toppings packed in a cup.

“Consumers used to think of ready-to-eat meals as an easy way to gulf down one meal. Now, they want a meal that is fast, but also a meal that is good,” the company said, adding it has sold more than 2 million “cup rice” products since their launch in April.

E-Mart, the country’s biggest discount grocer, is also moving to bolster its foothold in the market by teaming up with its hotel affiliate and targeting consumers looking for quality ready-to-eat meals.

It has also increased the sheer number of products sold under its “Peacock” brand, more than doubling the number of its products in the past year. The company said it plans to increase the current 600 products to 1,000 by 2019.

The trend is part of the country’s booming solo economy.

One-person households, which accounted for 15.6 percent of all households in 2000, have been on the rise, with the portion reaching 26.5 percent this year and forecast to hit 34.3 percent by 2035, according to Hyundai Research Institute.

Other industries have quickly jumped on the changing demographics, with Swedish furniture giant IKEA opening its first store in the country in December last year.