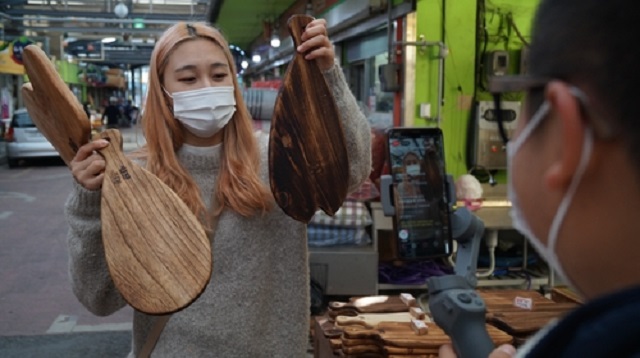 Oh Mun-hyun (L), 23, and Kim Jin-deok, 20, live-stream their shopping on behalf of their viewers to help merchants at traditional five-day markets. (Yonhap)

During the broadcasts, the two live-stream their shopping on behalf of their viewers to help merchants at traditional five-day markets in South Gyeongsang and Jeolla Provinces, regions that were damaged by flooding last summer.

The traditional five-day market in Gurye, South Jeolla Province reopened in September after being shut down for more than 40 days due to flood damage.

After the market reopened, Oh Mun-hyun and Kim Jin-deok, who hail from the region, started live commerce broadcasts through a mobile app.

During the broadcasts, they live-stream shopping on behalf of viewers and send the items purchased to those placing orders.

Their live commerce broadcasts has been offered once a week, starting from Gurye to other traditional markets in South Gyeongsang and Jeolla Provinces, including Namwon, Gokseong, and Hadong.

As part of the live commerce broadcasts, viewers place orders and pay through an in-app payment system after watching the price presented by merchants. After checking that the in-app payment is completed, Oh and Kim pay the merchants.

Whenever the live commerce broadcasts are turned on, about 200 to 300 viewers on average join and purchase the items selling at traditional five-day markets.

“We launched this service not for profit but to help merchants who were affected by the flooding. In the initial days, we bore all of the expenses other than the item price,” Kim said,

“As demand grew day after day, however, we started feeling a financial burden. Now we operate by charging a basic delivery price.”