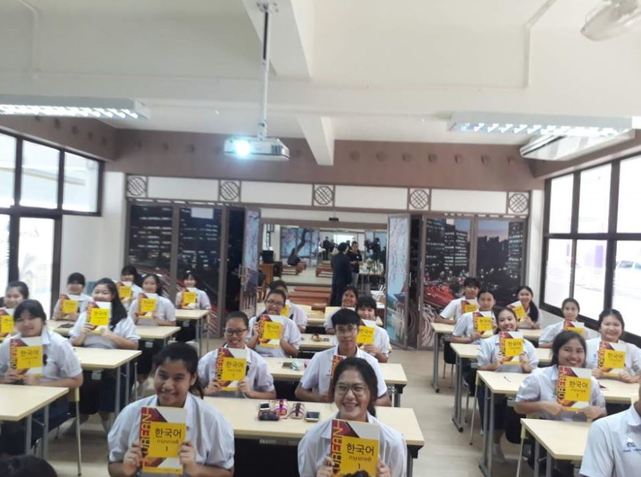 BANGKOK, Apr. 2 (Korea Bizwire) — The fever for learning Korean is steadily spreading among Thai students, as the number of secondary schools teaching Korean as a second foreign language in Thailand is expected to swell to 130 this year, officials said Tuesday.

The Korean Education Center in Thailand said as many as 130 middle and high schools in the Southeast Asian country are expected to adopt Korean as a second foreign language in the new semester set to begin in May.

Thailand first adopted Korean as a second foreign language in 2007, and the number of Thai middle and high schools teaching Korean increased to 119 last year, the center noted.

As of 2018, about 130,000 elementary and second school students were learning the Korean language outside the Korean Peninsula, and Thailand accounted for 37,401 of them, it noted.

In order to keep up with the boom for learning Korean at Thai schools, South Korea’s Ministry of Education plans to send an additional 45 Korean teachers to Thailand this year.

In a related move, the governments of South Korea and Thailand have jointly arranged a Korean language and culture training for 130 Thais who are teaching or plan to teach Korean at as many Thai secondary schools.

Notably, 140 Thai students were trained in both Thailand and South Korea as Korean teachers under Seoul’s state scholarship program from 2013 to 2016 and began to be employed by Thai secondary schools in 2016.

“The status of the study of Korean has further strengthened in Thailand, as all of the 140 Thai Korean teachers trained under scholarship programs have been employed by Thai secondary schools,” said Kim Ju-yeon, head of the Korean Education Center in Thailand.

“We will further expand bilateral cooperation to develop the education of the Korean language in Thailand and to improve the competence of Korean teachers.”