SEOUL, Sep. 10 (Korea Bizwire) – Korean boy band N-Sonic wowed K-pop fans in India. N-Sonic is the first ever K-pop band to visit India, where the globally popular K-pop or K-wave does not have a great hold over, compared with other markets.

On last August 30, N-Sonic performed at “K-POP Festival 2014 India” in Delhi, India, which was cohosted by the Korea Culture Centre India (KCCI) and the Korea Tourism Organization (KTO). A couple of thousand K-pop fans thronged into the festival, completely filling up the seats at the venue. Hundreds of fans who could not make it for the concert were forced to wait the band outside.

At the concert, N-Sonic enchanted concrete attendees with dazzling performances and great charisma, decorating the concert with its hit songs like “Pop Beyond,” “Run & Run,” and “Television.”

Many leading local media outlets competed fiercely for covering the concert and interviewing the band members. Following the concert, it was slated to hold a fan signing event; unfortunately, it was concealed so as to insulate the crowds from an unexpected accident caused by them flocking into the band members at once. 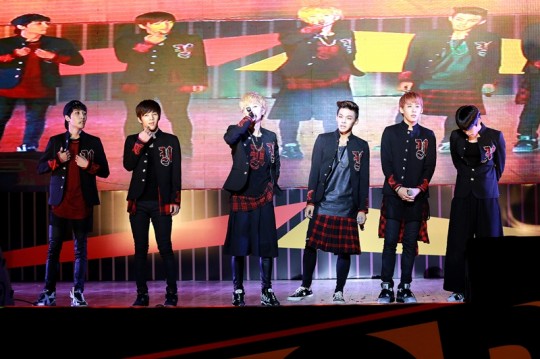 Even N-Sonic members were surprised to see thousands of fans rush to the concert hall in India. (image: C2K Entertainment )

Director Kim Kum-pyung of KCCI said, “At first, I was worried about this first Hallyu event here in India, but it turned out to be more than successful. As incredible as it seems, thousands of people flocked into the concert and prestigious Indian media outlets vied for covering the first Hallyu event,” and added, “I can dare to say that I assure the success of K-pop in India, observing it through N-Sonic. Considering the number of its fans, I expect the boy band to become a key distributor for Hallyu.”

CEO Cho Gi-hoon of C2K Entertainment said, “The N-Sonic members are missing Korean fans in the middle of their tight concert schedules in Hong Kong, China and India. They have been working on for their new album from the very day that they came back from the Asian tour concert. Please wait and see them come back to you soon, not later.”

On coming back from the month-long concert tour, N-Sonic is stepping up efforts to make a new album, looking forward to performing on a Korean stage.