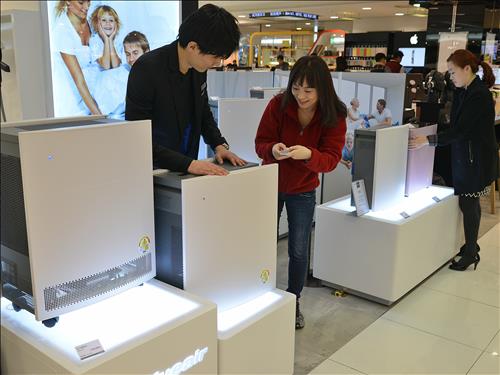 A consumer browsing a lineup of air purifiers models at Lotte Department Store in Busan.

Records from the Korea Customs Service (KCS) showed outbound shipments reaching $119.1 million for all of last year, up a sharp 33.3 percent compared to 2013. The average unit price also rose, up 47.2 percent on-year to $101 from $69 in 2013, an indication that higher-end products are being exported.

The KCS said last year’s showing marked the fifth year in a row that air purifier exports grew at a fast pace. Double digit growth has been reported every year starting in 2010.

China demand peaked in April and May, a trend recurring for the past two years, apparently from yellow dust that affects the northwestern part of the country, including Beijing and Tianjin, in spring time.

Exports to China accounted for 69.7 percent of the total, followed by 10.3 percent for the United States and 2.9 percent for Hong Kong.

Besides these countries, air purifiers were shipped to 60 countries worldwide, up from 57 in 2010, the customs office said.

But while exports rose in monetary terms, total volume dipped 9.4 percent on year to little over 1.18 million units, it said.

Malaysia was the largest overseas manufacturer of air purifiers imported, making up 67.8 percent of the total, followed by 22.2 percent for China and 6.4 percent for Switzerland.