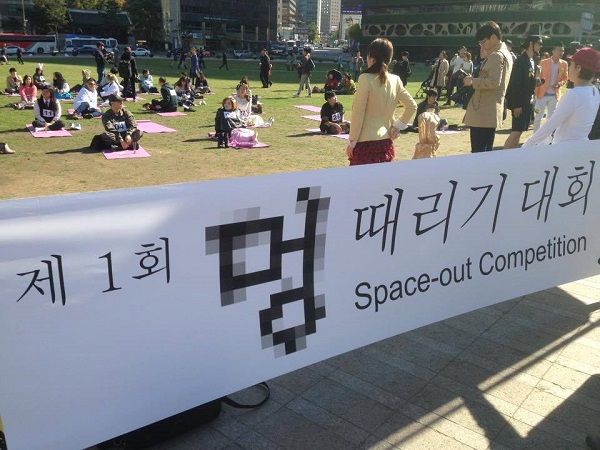 A nine-year-old girl who got the most stickers and had the slowest heart beats won the contest. (image: Seoul Metropolitan government Facebook)

SEOUL, Oct. 29 (Korea Bizwire) – The first “spacing-out competition” was held on October 29 at Seoul Plaza in front of Seoul City Hall. The contest is to pick the ones who can zone out the most. A total of 50 contestants participated in the competition, and its competition rate was whopping three to one. Participants sit on a grassplot quietly for three hours from noon on Monday, doing nothing but staring unfocused.

Passers-by put a sticker on a person who seemed to space out very well. In order to make an objective evaluation, in addition, heart beats were also checked. A nine-year-old girl who got the most stickers and had the slowest heart beats won the contest. Ironically, the winner received a trophy modeled after Rodin’s statue “The Thinker.”

In modern Korean society filled with an increasing number of people who are obsessed with contemplating something or reading something using smart gadgets, the competition speaks volumes.

According to an article reported by Korea BizWire, “one in every four Korean teenagers has a high risk of smartphone addiction.” Adults are not that different from them. Almost all the people in a subway train only concentrate on their smartphones. Due to the devices, modern people are trapped in continuous external stimulations and don’t leave their brain alone.

The competition reminds us that, once in a while, it is good for us to do nothing and think nothing, completely zoning out.