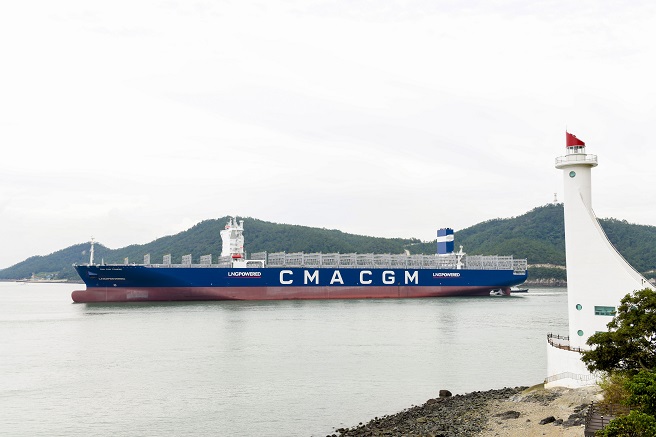 The world’s first LNG-powered container ship built by Hyundai Samho Heavy Industries Co. is afloat off the southwestern city of Mokpo, South Korea, on Sept. 15, 2020, ahead of its delivery to Singapore’s Eastern Pacific Shipping. (Yonhap)

SEOUL, Oct. 27 (Korea Bizwire) — South Korean shipyards are likely to win more orders next year as toughened environment regulations may prod clients to resort to local shipbuilders, which have a competitive edge in eco-friendly vessels, a report said Tuesday.

Their combined new orders are estimated at 10 million compensated gross tons (CGTs) worth US$22.5 billion in 2021, more than two times an estimated 4.4 million CGTs worth $11 billion in 2020, according to the report by the Korea Eximbank Overseas Economic Research Institute.

In line with intensified environment regulations led by the European Union, South Korean shipbuilders’ new orders for ships propelled by liquefied natural gas (LNG) are predicted to rise, it said.

The LNG-fired ships are usually said to have lower emissions compared with oil-fired ships.

Last month, the European Parliament passed a bill to launch its Emission Trading System (ETS) of ships to cut emissions in 2022.

Shippers receive or buy emission allowances, which they can trade with one another as needed within the cap on emissions set by the European Union.

The International Maritime Organization (IMO) is also considering reducing the emission level of ships by 30 percent by 2025 and by 70 percent by 2050 compared with 2008.

But South Korean shipbuilders are expected to continue to suffer low order backlogs from the second half of next year, the report said.

South Korean shipbuilders’ new orders are predicted to fall over 50 percent this year from a year ago, it said.

As of early October, South Korean shipbuilders have one and a half years worth of order backlogs amounting to 18.42 million CGTs, down 21 percent from the beginning of the year.