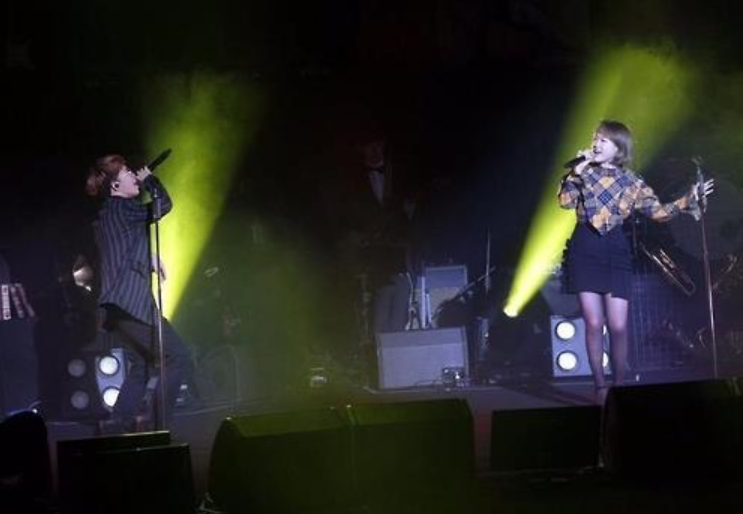 The photo provided by YG Entertainment shows duo AKMU performing on stage in Shanghai in December. (Image courtesy of Yonhap)

SEOUL, Jan. 29 (Korea Bizwire) – South Korea’s cultural and entertainment industries have been walking on thin ice for the past few months, as signs have continued to emerge that Beijing is going after Korea’s entertainers in protest of Seoul’s decision to bring in an American missile shield.

On Tuesday, soprano Sumi Jo confirmed what had been feared among Korean classical musicians: Her concerts, scheduled to run from Feb. 19 in three Chinese cities, have been canceled without proper explanation after months of delay by the Chinese government to issue a visa.

Lamenting the move as “unfortunate,” the Grammy-winning Korean diva wrote in her Twitter page that it was regrettable to see “the pure cultural and art sectors” fall victim to Chinese retaliatory measures.

Just prior to the incident, another top classical musician Paik Kun-woo’s performance with China’s Guiyang Symphony Orchestra in the country was also axed.

“Korean singers’ activities in China have ground to a halt. They neither get permission to perform nor get invited to appear on Chinese shows,” said an agent, on the condition of anonymity, who helps Korean entertainers work in China.

“It is a very serious situation,” the agent said, adding, “Some Korean producers have returned to Korea due to production problems in China.”

While Beijing has never confirmed that it is purposely reining in South Korean cultural exports, the development since Seoul’s decision in July to set up the system called THAAD on Korean soil has demonstrated that it is. Beijing openly criticizes the decision as it fears the system can be used by the U.S. to check up on its own military activities.

In what appears to be retaliatory measures, Korean entertainers have been denied permission to perform in China. Some of the popular singers, such as Psy and Hwang Chi-yeol, appeared on Chinese shows with their faces being blurred out. In some cases, their appearances were edited out all together.

Song Joong-ki, the lead character of the sensational hit “Descendants of the Sun,” was replaced by a Chinese actor in a mobile phone advertisement. Actress Yoo In-na was abruptly dropped out from a Chinese drama.
There were a few lucky ones who escaped from the fallout.

YG Entertainment’s AKMU was allowed to perform in Shanghai in December. Band FT Island had a concert in the city in the same month. Singer and actor Jang Keun-suk performed in Guangzhou earlier this month.

However, popular boy band EXO had to indefinitely postpone its 10,000-seat concert at the request of the Chinese organizer. It was supposed to be held in December in the eastern Chinese city of Nanjing.

“At the end of last year, rumors swirled around that the government would allow small concerts, with less than 2,000-seat, in major cities. But what we officially heard was we need to submit an application,” said another agent handling Chinese affairs.

“Strict security is put in place at a Korean concert and I even heard that in one case, security staff asked for a translation of what Korean performers would say on stage,” the person added.

To stay away from the negative impact, Korean entertainment agencies are expanding their activities in other Chinese-speaking countries.

“Only the (group) member from mainland China is active there from time to time. As a group, they are active in Hong Kong, Macao and Taiwan. It is increasingly difficult to get a permission to perform in Hong Kong as well,” a person who leads a Korean entertainment company told Yonhap News Agency, also on the condition of anonymity.

An executive from HOW entertainment that represents singer Hwang Chi-yeul said “In the first half of last year, we received a flurry of invitations from Chinese reality show makers. In the fall, it virtually stopped. We are still able to continue meeting Chinese-speaking fans in Malaysia and Taiwan.”

HJ Culture, the producer of musical “Little Jack,” scrapped its original plan to bring in the original Korean team to perform. Instead, it has decided to show the licensed show in Chinese to be on the safe side.

“We don’t believe the licensed version will cause any trouble. But we are open to all possibilities while we go through the pre-screening process,” CEO Han Seung-won said.

Experts from the Korean performance industry are concerned that the on-going rows over the missile defense, if continued, could tear down the build-up of cultural exchanges between the two nations.

“China’s performance sector is still at the fledgling stage. I am worried that the friendly relations might get destroyed by irrelevant issues,” said Won Jong-won, a musical critic and professor at Soon Chun Hyang University in Asan, South Chungcheong Province.