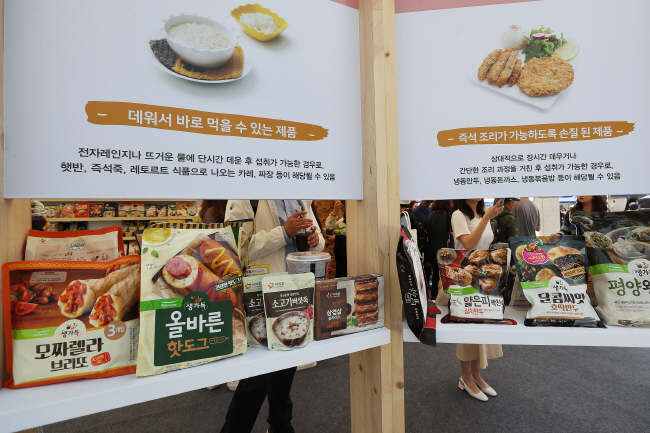 A variety of home meal replacement products displayed at an event held at Gwanghwamun in central Seoul on May 10, 2019 to promote those convenient ready-made foods. (Yonhap)

Shinhan Card Co., a major credit card company, compared the monthly usage of cards in early 2019, prior to the pandemic era, and early 2021.

The comparison showed that purchases of pajamas and other homewear soared by 200 percent every month between those two periods.

Purchases of homewear in March and April of this year were 530 percent and 594 percent higher, respectively, than the same months in 2019. Sorted by age, card use on homewear purchases jumped by 540 percent among consumers in their 40s.

This trend is attributed to the spread of work-at-home programs in the pandemic era, which has boosted demand for homewear instead of suits or other typical office attire.

The pandemic has also altered the food culture in the country to shift towards home cooking.

Card use for home meal replacement (HMR) products and meal kits early this year jumped by more than 160 percent every month since early 2019. In February and June of this year, card use jumped by 240 percent and 258 percent, respectively, compared to the same months in 2019.

Sorted by age, card usage hikes were most vividly seen among consumers in their 30s and 40s, up by 204 percent on purchases of HMR products and 224 percent for meal kits.

The so-called ‘home-around consumption’, a preference among consumers for choosing to stay near home instead of heading to denser urban areas for food and shopping, has also become a new trend.

The tendency to use a convenience store located within a 500-meter radius of the consumer’s home for food and shopping rose from 37 percent in early 2019 to 45 percent early this year, up by 8 percentage points.

Sorted by age, the number of individuals in their 20s and 30s who said they shopped at convenience stores near home grew by 8 percentage points since 2019, while the rate of increase was 7 percentage points among those in their 40s, 50s, and 60s.