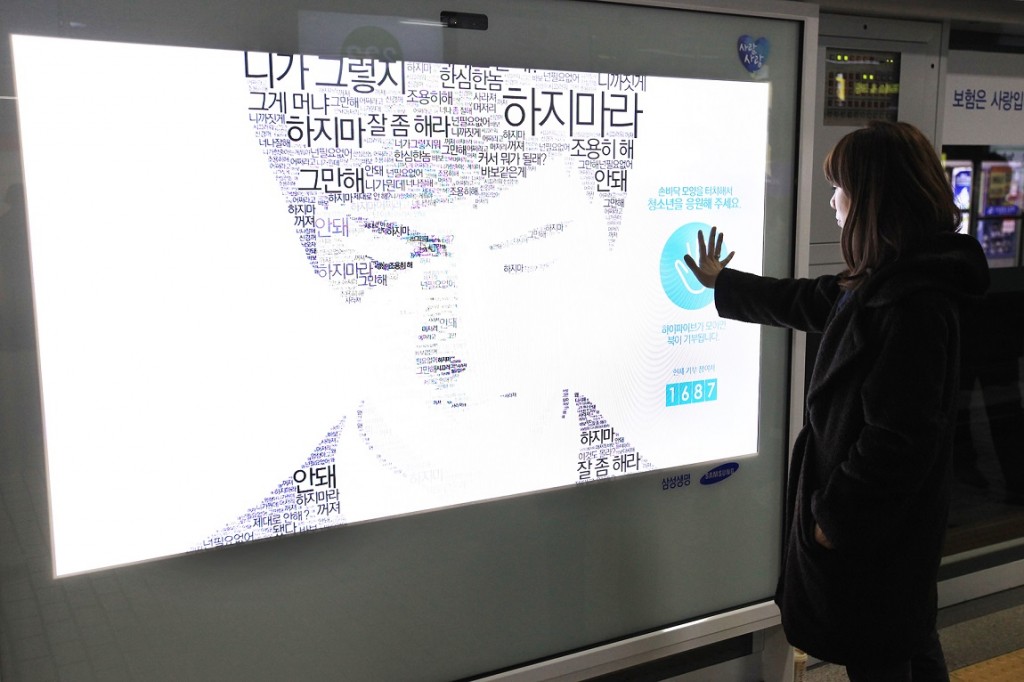 The screen doors are currently in place in Seoul National Teachers College station as well as in Gangnam Station, both on No. 2 Line. (image: Samsung Life)

SEOUL, Korea, Dec 18 (Korea Bizwire) – In a 1987 movie “Wings of Desire,” there is a scene in which an angel reads a human’s mind by putting his hand on the person’s shoulder. Then the person is instantly comforted from her distress and regains hope. Just like in the movie, the same idea has been put to use in real life. Samsung Life, Korea’s largest life insurance company, has recently launched a promotional campaign in which it uses the interactive screen doors in subway platforms.

There have been several attempts before by advertisers to take advantage of the screen doors for commercial purposes. Unlike previous tries, however, Samsung Life’s interactive campaign employs latest technology so that the screen changes messages as the person waiting for the subway walks by.

A college student who experienced the screen door at Gangnam Station said, “I was just waiting for the subway car to come and the screen image changes as if it were following me. I felt good to see the scene of the Han River Bridge early in the morning on the way to school. I could even send a text message by tapping on the screen.” The screen doors are currently in place in Seoul National Teachers College station as well as in Gangnam Station, both on No. 2 Line.

The screen doors at Gangnam Station feature a commercial on the “Serotonin Drum Club.” The image of a saddened young boy changes to a smiling face if the pedestrian gives a “high five” by putting his hand on a palm-shaped spot on the screen, with a scene of young drummers playing music. In a city of 20 million and almost a quarter of them use the subway daily, the interactive screen doors will certainly be a nice way to comfort weary souls.