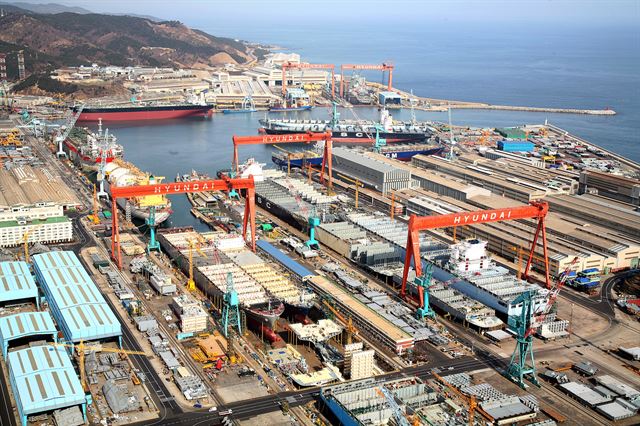 According to the sources, DSME chief executive Jung Sung-leep is slated to hold a news conference on Thursday, where he may announce plans to dismiss workers.

DSME’s self-help plan, which was submitted to creditors in 2016 in return for a multibillion-dollar lifeline, calls for the shipyard to slash its workforce to below 9,000 by the end of this year from roughly 13,200 at the end of 2015.

As of end-June this year, DSME’s payroll stood at 9,960, which means that the company would have to slash nearly 1,000 jobs by the end of this year.

Industry watchers said DSME may have to lay off workers due to a delay in the announcement of the outcome of a bidding war for offshore platforms to be installed in the North Sea Rosebank oil field in Britain. The announcement, originally due in late November, has been pushed back to next year.

In June, Jung told a news conference that it was difficult to cut jobs because there was much unfinished work left, indicating DSME would have to prune jobs unless it clinches a big order.

A DSME official, however, said the company has yet to make a decision on the matter. “At the moment, nothing has been decided on the issue of layoffs. The company expects to achieve its order targets for this year,” the official said.

The shipyard, based on the southern island of Geoje, was forced to submit a self-help plan to creditors in 2016, which calls for reducing its 14,000-strong workforce by 30 to 40 percent by the end of 2018. Currently, it employs about 13,000 workers.

“Samsung Heavy has more than delivered on its capital injection plan, but it should review the matter of layoffs more closely,” a company official said.

Under the self-rescue package, Samsung Heavy pledged to raise 1.45 trillion won (US$1.27 billion) in new capital, but the company has already secured 2.6 trillion won through two rights offerings and other means.

HHI, the world’s No. 1 shipbuilder by sales, carried out an early retirement program for workers in its offshore engineering sector in August this year, laying off some 150 workers.

The layoffs came as HHI’s offshore platform plant in the southeastern port of Ulsan was shut down that month after failing to win any orders for the 43rd consecutive month.

The shutdown has left 1,200 workers idle. HHI has applied for permission from a regional labor relations commission to retain them and pay 40 percent of their normal wages between November and June next year, but the commission rejected it.

South Korea’s labor standards act requires a company to pay workers 70 percent of their average wage when it is forced to close temporarily for managerial reasons. But a blessing from the commission allows the firms to pay less than the minimum.

A company official said there will be no additional layoffs for the time being. “The idle workers have been participating in an in-house education program, with some putting their affairs in order,” the official said.