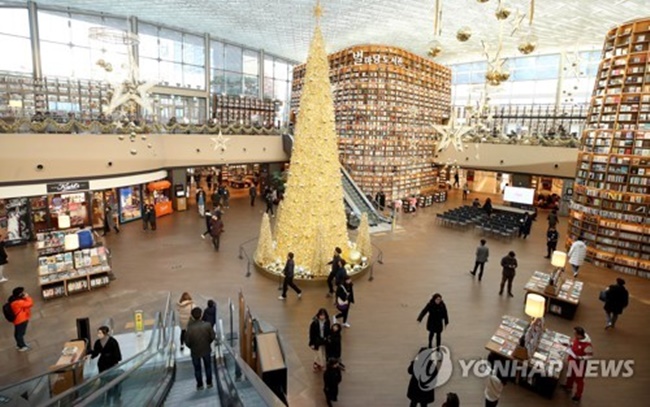 This photo taken on Nov. 30, 2017, shows a Christmas tree set up at a library run by South Korean retail giant Shinsegae at the Convention and Exhibition Center (COEX) in southern Seoul. (Image: Yonhap)

In late May, the retailer launched an open library at the Convention and Exhibition Center (COEX) in southern Seoul as part of its efforts to attract more shoppers to its shopping complex Starfield COEX.

Six months after the opening, Shinsegae said the library has been playing a key role in drawing consumers, leading to increased sales in nearby shops.

“Over 10 million people are estimated to have visited COEX after we opened the library,” said Lim Young-lock, chief of Shinsegae Property, the group’s property development unit. “It is our first step to vitalize the COEX area, which has long been depressed.”

The company said it has invested 700 million won (US$640,000) to run the library in the last six months, including 100 million won solely spent topurchase books and the cost to host various cultural activities.

The remark was made after the opening ceremony of Shinsegae’s third all-in-one shopping complex in Goyang in the northern outskirts of Seoul in August, which is equipped with various leisure activity options, along with hundreds of fashion brand shops and restaurants.

The company increased the percentage of area dedicated to services other than product sales, such as restaurants and entertainment facilities, from 20 percent at its first Starfield store in Hanam, southeast of Seoul, to 30 percent at the Goyang mall.

Shinsegae’s move to invigorate its offline businesses comes in line with a steep rise of online purchases in South Korea as smart devices are expanding their presence in the world’s most wired country.

Transactions made with smartphones and tablets, among others, reached 6.33 trillion won (US$5.83 billion) last month, up a solid 9.9 percent from a year earlier, according to data from Statistics Korea.