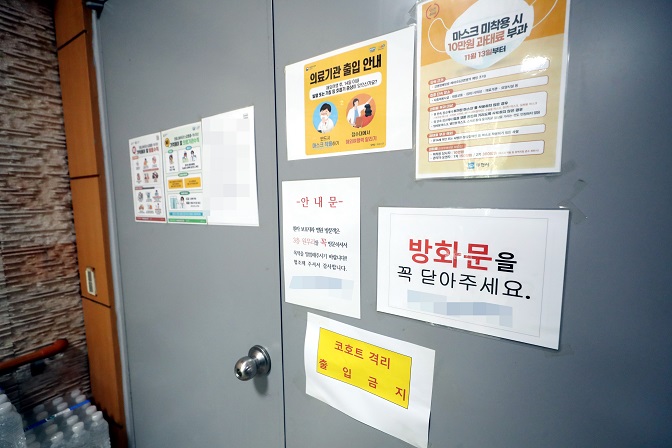 This undated file photo shows the entrance to a long-term care hospital put under cohort isolation. It is not directly related to the article. (Yonhap)

SEOUL, Dec. 1 (Korea Bizwire) — The family of a female COVID-19 victim, who died during cohort isolation at a long-term care hospital for senior citizens in Seoul, plans to start a damage suit against the state, their lawyers said Wednesday.

The lawsuit will soon be filed with the Seoul Central District Court on behalf of five bereaved family members of the victim, according to Lawyers for a Democratic Society, an association of progressive lawyers, also known as Minbyun.

The victim, whose identity was withheld, died on Dec. 27 last year of multiple organ failure and pneumonia caused by the new coronavirus at the hospital in Seoul’s southwestern district of Guro, which was put under cohort isolation on Dec. 15 due to an infection of one of its patients.

The victim tested negative for the coronavirus on the first day of the cohort isolation but was diagnosed with COVID-19 on Dec. 17 and died 10 days later.

The bereaved family was informed by the hospital of her death but was not allowed to identify her body for quarantine reasons.

Only some of her family members were permitted to see the coffin with her body through a glass wall. Her body was cremated one day after her death and her belongings were not delivered to the bereaved family.

Minbyun said it will include not only the state but also the Seoul city government, Guro Ward Office and the long-term care hospital in the list of defendants presumably liable for damages.

“It has been continuously pointed out that cohort isolation is legally ambiguous and its detailed rules are problematic. The upcoming damage suit will be meaningful as the first litigation seeking the judgment of the judiciary on the issue,” said a ranking official of Minbyun.

The bereaved family said through Minbyun that they may suffer from trauma forever as the victim may have died bitterly at the hospital. They also expressed resentment against the government for not saying a single word of apology.