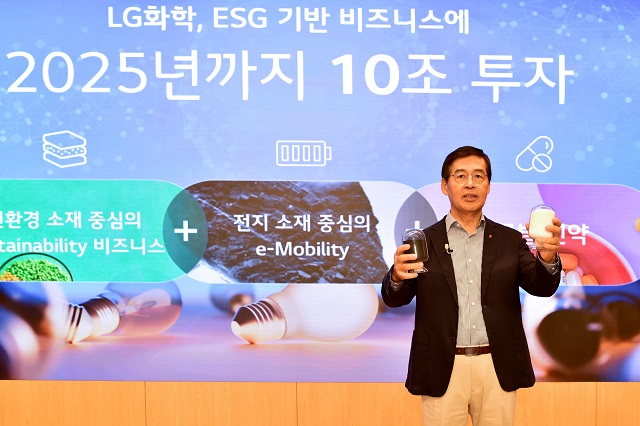 LG Chem CEO Shin Hak-cheol announces the company’s sustainable business strategy during an online press briefing on July 14, 2021, in this photo provided by the company.

The chemical unit under LG Group said it will speed up its transition to an eco-friendly business portfolio by expanding partnership with major industry players through mergers and acquisitions, joint ventures and strategic investments, saying over 30 projects are currently under review.

The parent of battery maker LG Energy Solution Ltd. said it will pour 6 trillion won into the e-mobility sector to ramp up the production capacity for major lithium-ion battery materials, including cathodes, anodes and separators, to establish a stable battery supply chain.

“We will expand the battery material business by establishing a comprehensive supply chain to maximize synergy with LG Energy Solution,” LG Chem CEO Shin Hak-cheol said, adding the firm will expand partnership with other industry players in the e-mobility sector.

It will break ground for a cathode factory in the southeastern city of Gumi in December to expand its annual capacity from the current 40,000 tons to 260,000 tons in 2026.

LG Chem said it is nearing a joint venture deal to secure a stable supply of metals for lithium-ion batteries and mulling various forms of partnership to build its own battery separator factory in the near future.

The battery maker said last week it has so far secured 180 trillion won worth of EV battery orders from global automakers and will further strengthen its battery leadership with additional investment.

To draw additional funds for its battery business, LG Chem has been preparing for LG Energy’s debut on the Seoul bourse. The company submitted an initial public offering (IPO) application to the bourse operator Korea Exchange last month.

Market watchers said LG Energy may be able to raise around 10 trillion won through the share sale, which is expected to be one of this year’s mega IPOs. Its market value is estimated at up to 100 trillion won.

“If the IPO processes run smoothly, (LG Energy) is expected to be listed (in the market) within this year,” Shin said.

LG Energy posted 13 trillion won in revenue in 2020 and aims to generate over 30 trillion won by 2024. The company aims to more than double its EV battery production capacity to 260 gigawatt hours by 2023.

In addition, LG Chem said it plans to spend 3 trillion won by 2025 to expand production capacity of bio, eco-friendly and renewable materials to tap deeper into the green market.

The firm set aside 1 trillion won for its health care business to expand its clinical-stage pipeline for new drugs for diabetes, cancer as well as metabolic and immune-related diseases.