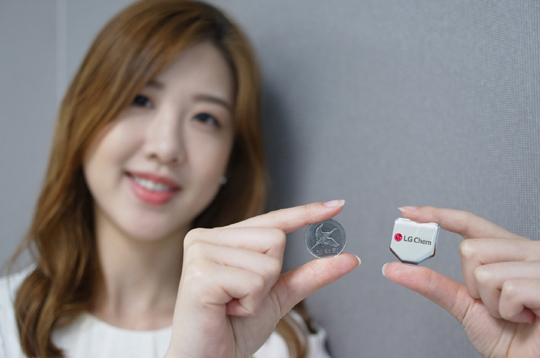 LG Chem added the hexagon battery will lend support to its sales down the road, as round-shaped devices have become a new trend in the global smartwatch industry. (image: LG Chem)

The company said the hexagon-shaped model boasts 25 percent higher capacity compared to traditional rectangular versions, allowing users to use their smartwatches up to four hours longer.

LG Chem added the hexagon battery will lend support to its sales down the road, as round-shaped devices have become a new trend in the global smartwatch industry.

LG Electronics latest smartwatch, the LG Watch Urbane lineup, boasts a round-shaped display, while its bigger rival Samsung Electronics also hinted earlier its next wearable device will be round.

While LG Chem did not provide a detailed launch schedule for the new battery, it added the company is currently making efforts to develop batteries of various shapes, including an “L” shaped one or a rectangular model with a hole in the middle.

“The best way to lead the market is by making and fostering a new market,” LG Chem said. “We plan to become the world’s No. 1 player in the small battery segment in 2018.”