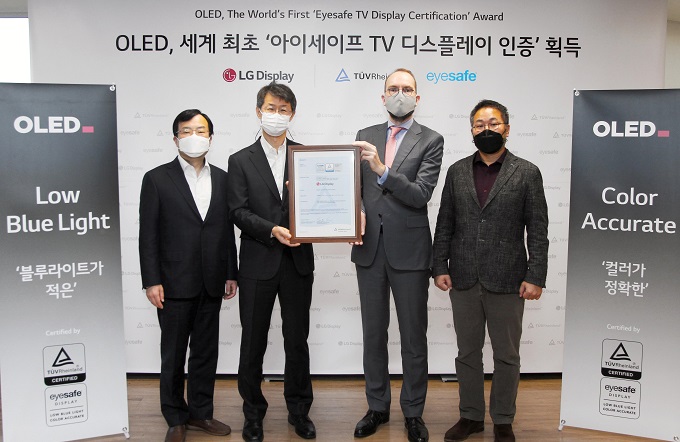 This photo provided by LG Display Co. on Jan. 5, 2020, shows officials from LG Display and TUV Rheinland posing for a photo in Seoul after the company’s OLED panel won Eyesafe certification.

Its OLED display became the industry’s first TV panel to win an accreditation from Eyesafe, a U.S.-based eye protection certification agency, according to LG Display.

Eyesafe developed standards for eye protection in cooperation with TUV Rheinland AG, a German technical test service and certification organization. It measures blue light, which can cause sore eyes and even sleep disorders when people are excessively exposed to it.

The certification requirements state that the proportion of harmful blue light out of a product’s total blue light emissions must be less than 50 percent.

LG Display said its 65-inch OLED TV panel meets the standards with the portion of harmful blue light standing at only 34 percent, the lowest among TV panels and about half of that of liquid crystal display (LCD) TV panels.

Unlike LCD, OLED does not require a backlight unit since it uses self-lighting pixels.

LG Display said it plans to showcase OLED display solutions that highlight protection to users’ eyes and health at the Consumer Electronics Show (CES) 2021 that will be held online next week.