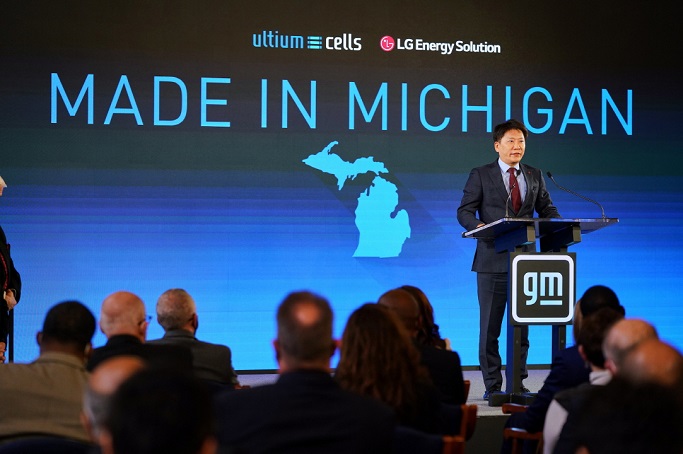 LG Energy Solution Vice President Kim Dong-myung announces a US$2.6 billion investment to build a third joint factory with U.S. General Motors Co. in the U.S. state of Michigan, at a launching ceremony held in the same city on Jan. 25, 2022, in this photo provided by LGES.

The factory by Ultium Cells LLC, their U.S.-based joint venture, will be built in Lansing, Michigan, by 2024, the South Korean battery maker said in a press release.

LGES and GM held a ceremony in Lansing on Tuesday (U.S. time) for their formal announcement on the joint investment, led by their CEOs — Kwon Young-soo and Mary Barra.

The third joint factory in the U.S. is expected to begin mass-producing batteries in early 2025, with an aim to expand the annual production capacity to 50 gigawatt hours (GWh), enough to make some 700,000 all-electric vehicles.

The joint venture is already building one in Ohio and another in Tennessee, with both aiming for annual production capacities of over 35 GWh. The Ohio factory will start operating this year, with the Tennessee plant to start running next year.

LGES, the world’s second-largest electric vehicle battery manufacturer after China’s CATL, is pushing to expand its presence in North America, with a plan to invest more than 5 trillion won (US$4.17 billion) by 2024.

The battery maker also has partnered up with global carmaker Stellantis N.V. to build a battery plant in the region.

LGES has said it plans to spend 8.84 trillion won to boost its domestic and overseas production.