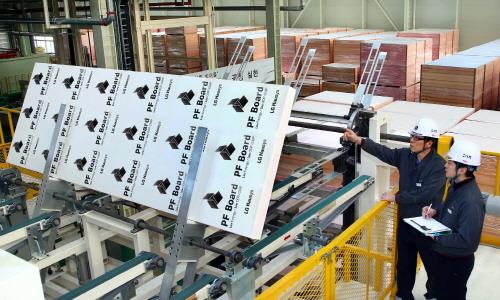 PF insulators are fire resistant, and they produce almost no toxic gas when they do burn. (image: Yonhap)

SEOUL, March 31 (Korea Bizwire) — LG Hausys is expanding its business related to phenolic foam (PF), a highly efficient and semi-noncombustible insulator, amidst a growing trend focusing on the use of high-functioning and eco-friendly materials in the construction industry.

LG Hausys is one of only four manufacturers in the world that are capable of mass-producing PF insulators. PF insulators are fire resistant, and they produce almost no toxic gas when they do burn. Moreover, they insulate better than other typical solutions, with a thermal conductivity of 0.018W/mk, double that of Styrofoam.

Although the Korean insulation market is currently dominated by Styrofoam and urethane foam insulators, which have a combined market share of up to 80 percent, LG Hausys is determined to raise its PF insulator sales from 8 billion won in 2014 to 14 billion won this year and 50 billion won in 2018, according to an announcement on March 29.

The company is also planning to build production facilities in China to expand its PF businesses internationally.